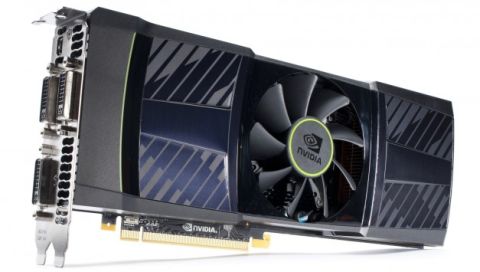 A brutally powerful yet silent videocard that shreds the benchmarks. Itll also shred your wallet, and it needs a minimum 700W PSU to keep it humming.

I'll be frank: the GeForce GTX 590 will murder your checking account. At $700, you're probably wondering—as I was—if it could possibly be worth it.

Well, it's time to start scraping up extra cash by mowing lawns on the weekend, because yep: this thing is amazing. With all graphics options jacked to their highest levels, the GTX 590 will crush and smoothly liquefy any game you shove in its way, even at the demigodly resolution of 2560x1600. And while it looks like a normal dual-slot videocard (it's reasonably small for a high-end card), the GTX 590 is actually two GTX 580 chips melded together and crammed into a single casing. The downside of this doubling is that the processor and graphics clock speeds of each on-board chip are set at 607MHz/1215MHz, slightly less than the 772MHz/1544MHz you'd get from running two whole GTX 580 cards in SLI. But since two GTX 580s would run you almost a thousand bucks, that's a pretty minor quibble, especially considering just how much ass the GTX 590 kicks.

Dream-level videocards sometimes suffer from obnoxious fan noise due to the heat from their increased clock and memory speeds. But despite cranking out an amazing 47 frames per second in Metro 2033 and 90fps in STALKER: CoP (at high settings with 4x antialiasing/4x anisotropic filtering and 2560x1600 no less), the GTX 590's single, center-mounted fan runs ninja-quiet. It's damn nice to finally get a videocard that doesn't sound like a helicopter starting up in your PC.

That low-decibel output, of course, doesn't mean the GTX 590 isn't a power-hungry beast. This card requires no less than two eight-pin power connectors to function. To be on the safe side, I'd recommend at least an 800W power supply to keep the GTX 590 stable (as opposed to the minimum 700W PSU suggested by Nvidia). Like the GTX 580, the GTX 590 supports all the fanciest DirectX 11 perks, such as hardware tessellation, and you can set it to run PhysX with only a minor dip in performance at high resolutions. It'll also run Nvidia's 3D Vision.

For output, the GTX 590 forgoes an HDMI port in favor of three dual-link DVI connectors and one Mini-Display­Port connector. This is a little odd, but it still supports HDCP (High-band­width Digital Content Protection), so you can watch all your Blu-rays in full 1920x1080 resolution (as long as you've got a monitor that's also HDCP compliant). The good thing about three DVI ports is that hooking up multiple monitors is as simple as plugging in the cables and adjusting the Nvidia display settings on your desktop. (Enabling more than two monitors with different cables can be frustrating.)

Do keep in mind that unless you game at high resolutions (1920x1200 or above), you're better off saving money and sticking with a single GTX 580. But if you wanna see all your games in their maxed-out, visual best on a 30-inch LCD or multiple displays—the GTX 590 is the card for you. Note: it is illegal to sell your liver.

A brutally powerful yet silent videocard that shreds the benchmarks. Itll also shred your wallet, and it needs a minimum 700W PSU to keep it humming.