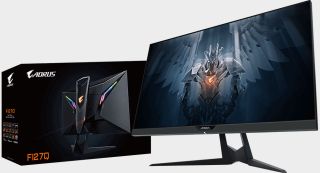 Don't try wrapping your head around any of that, it will make your brain hurt. The bigger point is, Gigabyte's Aorus FI27Q is actually a new product, with slightly different specifications than the Aorus CV27Q.

Both are pitched as tactical 27-inch displays, each with a 2560x1440 resolution, but the FI27Q swaps out the curved VA panel on the CV27Q and replaces it with a flat IPS screen. IPS displays typically offer better color accuracy, though the difference is usually less pronounced than when comparing against a TN display.

This is a FreeSync display, and it's also G-Sync Compatible, meaning it's been validated to leverage Nvidia's G-Sync technology and is enabled by default (when paired with a compatible graphics card). Some non-certified FreeSync displays can run G-Sync as well, but if they are not officially compatible, then users have to enable the feature manually in the GeForce Control Panel and hope it works out.

Gigabyte's tactical branding is based on a set of amenities, including both common and not-so-common ones. Falling into the former category is a black level equalizer to enhance darker scenes. Other aspects of the tactical branding include:

Gigabyte says the FI27Q supports HDR visuals. I'm not confident it would excel in that area, given the 350 nits brightness rating. I asked Gigabyte if it gets any higher when processing HDR content, and was told it peaks at 408 nits. For reference, 400 nits is one of the minimum requirements for VESA's DisplayHDR 400 certification (this is not a DisplayHDR-certified display).

I haven't tested this monitor, but I'm also not swayed by the tactical features. Fortunately, the specs look pretty good overall (save for HDR). It's also worth noting that this carries a zero bright dot guarantee for the first year.