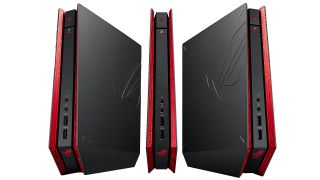 Maximum PC, our sister publication, sat down with Valve founder and Steam overlord Gabe Newell at GDC to talk about Steam Machines, Source 2, and the growth of the PC gaming market. Newell dropped a ton of great information, but it all starts with this humble introduction: “My name is Gabe Newell, I work at Valve.” Adorable.

Newell first laid down some amazing data: Steam has grown 50% year over year, and $57 million has been paid to content creators since Steam Workshop was introduced. Those two facts show why Valve thinks it’s such a safe bet to release Source 2 for free. For Valve, no barrier to entry means more users coming to Steam, and more cash flowing through the Steam storefront.

“Source 2 is going to be free,” Newell said. “Anyone who sees it as a valuable tool for developing a new game and shipping it, there’s no license fee, there’s no royalty, they’re free to use it.”

He also announced a release date for Steam Machines to hit retail: “Steam Machines will be coming this November at good, better, and best price points.” Valve will also be debuting Link, a device that lets gamers stream from any Steam Machine, PC, Linux, or Mac system to any TV. The interview team got to play with a Steam Controller, checking out a pre-alpha build of Unreal Tournament and last year’s Talos Principle.

Finally, Newell gave the first look at Valve VR, pivoting off of System Shock 2. Fifteen years ago, developer Looking Glass included a look at their vision for virtual reality. “Even though... Looking Glass is no more, you’re still playing it as a PC Gamer using Link and you’re using a Steam controller. What’s cool to us... is that this is a game that is being kept alive by its community. If you can keep an entire game alive just because of the contributions of the community, that’s a way of getting people outside of the PC gaming space to marvel at our focus on user-generated content.”