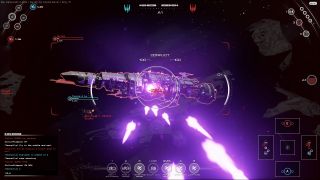 Edge Case Games has released a major update to Fractured Space, along with a new trailer that demonstrates how the game has evolved from the prototype stage to its current state, which looks just about ready for prime-time.

Fractured Space is a five-on-five game of capital ship combat in space, being developed by the team that created Strike Suit Zero, now working under the Edge Case name. It hit Early Access late last year and has undergone several updates since, most recently the "biggy" that went live on Steam yesterday.

Highlights of the update include two new ships, the Zarek Infiltrator and Zarek Carrier, 11 new crew members including Captain Jingles, plus ramming, remappable key binds, upgradeable systems, a strategic map, and multiple balance passes that affect point defense, jump abilities, and various aspects of individual ship types. Several bug fixes have also been made, as well as changes to the UI and server list messages.

Edge Case said the full breakdown of the update is literally too big to fit on Steam, so it posted the details on its own blog instead. A hotfix released today tweaks things a bit with a handful of small changes, while a few other known issues, like buggy ramming damage, will be addressed in a future update. Fractured Space is currently expected to launch in full later this year.