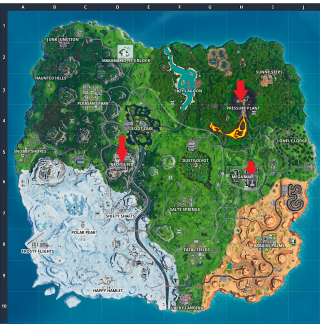 It's the final countdown! We're finally in the last week of season nine, which means something big is about to go down in Fortnite, but it also means that you don't have much time left to finish out your Battle Pass challenges.

For week 10's challenge to find three public service announcement signs, you're told where to go, but not exactly. The giant PSA sign at Pressure Plant can be found up on the wall inside where the robot is being built, Mega Mall's are found on a variety of walls within the mall itself, and Neo Tilted's are also on a number of buildings.

The signs look like the one above, flashing red and inter-changing into other various warnings. One warning says "when danger strikes, take the high ground," and we think it's more than just a meta-message about how to play the game, and is actually a hint on to where to go whenever the robot-monster fight goes down.