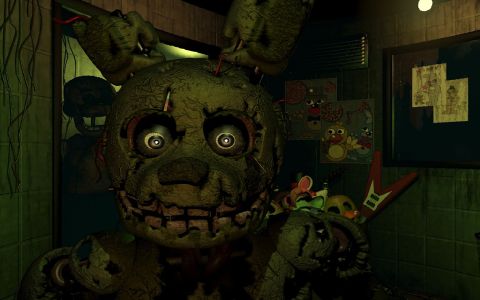 The excellently revised camera system and eerie villain makes Five Nights at Freddys 3 one of the better scare-fests out there.

What is it? The third and likely final game in a series involving spooky animatronic animals hunting for a poor security guard.
Reviewed on: Windows 7, Core i7, 8GB RAM, GTX 670
Play it on: Anything
Copy protection: Steam
Price: $8/£5
Release date: Out now
Publisher: Scott Cawthon
Developer: Scott Cawthon
Multiplayer: None
Link: http://scottgames.com

Five Nights at Freddy’s 3 completes one of the fastest-developed trilogies I’ve played. Like its months-old brothers, its stage feels primeval compared to the complexity of other games: a room, a desk, a glowing surveillance monitor, a softly buzzing fan, and a thing creeping in the darkness. It’s a familiar skeleton fleshed out with something noticeably—and refreshingly—different. In the end, I was scared as hell.

Yes, FNAF 3 has jump scares. A lot of them. As before, I risked cardiac seizure in a cramped security room as the night watch from midnight until 6 am, but my employer wasn’t a struggling pizzeria like last time. I instead guarded a horror house attraction pieced together by enthusiasts of the Fazbear legacy who’ve scrounged props and memorabilia from the shuttered original restaurants. I wouldn’t blink if the entire motif was creator Scott Cawthon indulging on the meta story of his games’ meteoric prominence, but it’s a suitable backdrop despite any subtext.

I liked how the ease of the first night (really, nothing happened for the entire five game hours) enabled me to absorb the place’s atmospheric spookiness without needing to fend off any attacks. There are 15 cameras stacked in two layers, which is the highest in quantity and intricacy of the series. They each frame relics of my past meetings with madness in each room: scuffed black and white tiling, Foxy’s gaping maw nailed to a wall like a hunting trophy, Chica’s head used as a strobe lantern. I specifically appreciate the sickly green and yellow hues, which remind me of body parts floating in mad-scientist preservation jars from classic horror films.

Expand the image for horrifying twitching.

When the attacks began, I noticed how vastly different FNAF 3 played from its predecessors. Most conspicuous is the reduction of active animatronics to a single walking suit named Springtrap. He’s appropriately terrifying as a decayed and patchwork rabbit and rather critical in the barely comprehensible FNAF mythos, an intriguing angle I disappointingly didn’t see emphasized enough in his impetus for stalking me. His animation set compared to his robotic counterparts is wonderfully lifelike and fluid. I shuddered when he slunk into the office to stare right at me during a game-over sequence. Even more thrilling was glimpsing his quick shuffles across the uncovered portions of the office background while I had the camera screen up, both a stomach-dropping ‘uh oh’ of an impending demise and some skillful perspective work from Cawthon.

The original gang didn’t disappear. Bonnie, Chica, Foxy, Freddy, and even a few newcomers from FNAF 2 (such as the baneful Balloon Boy) are now charred and hallucinatory phantom versions of themselves. They don’t kill me outright, but pile on sudden scares. A character would zap into the office whenever I spied it materializing somewhere on a camera feed. It’d pounce with a loud roar as soon as I lowered the screen, its face filling up my monitor before fading away. A phantom would sometimes loom silently in the corner of the office out of my view only to strike if I swiveled my head around. I loved those blink-and-gone moments of intense fear, but the novelty felt a little stale by the third night.

The best part of FNAF 3 is that the cameras have seen a complete rework as a system finally crucial to survival as a whole. One of the largest letdowns in the previous games was that only certain angles were important. They failed to really take advantage of the creative aspects of staying alive through surveillance. Here, every camera is equally vital in keeping Springtrap away. By generating a noise through the camera, I can distract Springtrap into investigating, buying me precious additional seconds on the clock. If Springtrap feels adventurous and clambers into a crawlspace, I can seal shut the passageway—again, I need all the cameras to pull it off.

Night of the endless IT

I was constantly reminded of the first game’s thrumming sense of paranoia, always struggling to keep my stress in check. Whereas FNAF 2 eschewed that emotional pressure, demanding fast reflexes, its successor relies on the eventuality of me making a mistake to start a slow snowball effect of disaster.

For instance, I’d scan the static fuzz of the camera feed for Springtrap, but oops, I found a phantom instead! It lunges at me and disables my tools, cutting power to my video, audio, or ventilation control. I access another interface to reboot the stricken software while alarms bleat imminent danger. All the while, Springtrap creeps ever closer, but I can’t keep track of him because I’m busy restarting everything. Before I can get back to the camera, he’s in my face. Game over.

But screeching into death never felt too frustrating. I valued the phantoms’ ability to instantly halt my momentum and strain my skills for the fleeting seconds when I couldn’t defend myself. I wasn’t bested by the game directly overpowering me, but by having my brain fatally outmaneuver itself. Helplessly watching the reboot screen was like repeatedly turning over a stubborn car engine while the killer slowly grew larger in the rearview mirror. Errors were small lessons.

A final nitpick: The original animatronics lack their personalities here. All they did was fly at my face, which inevitably turned repetitious, an issue the series still hasn’t shaken three games in. I missed catching Freddy’s demonic chuckle or Foxy’s short snatches of song. I don’t understand why ghost Chica can’t be as clumsy as her pots-crashing corporeal form.

Otherwise, Five Nights at Freddy’s 3 does well with its presentation. That the trilogy it wraps up so successfully even with its uncommon, almost barebone gameplay—no movement and minimal interaction—attests to its knack for weaving a stimulating world and dangling a mystery just out of reach. Our curious natures can’t help pursue .

Cameras crackle with significantly more static than before.

The minigames in between nights expose important snippets of backstory.

You’ll sometimes have barely enough time for a double take before a phantom vanishes from view.

You’ll need to act fast to seal Springtrap in the vent before he shuffles away.

The excellently revised camera system and eerie villain makes Five Nights at Freddys 3 one of the better scare-fests out there.