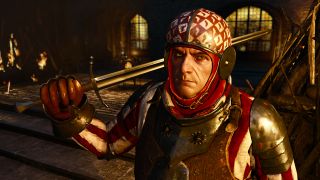 This article was originally published in February 2018.

With a population of 30,000, the free city of Novigrad is the cosmopolitan heart of the Northern Kingdoms. Geralt of Rivia’s search for his adoptive daughter Ciri brings him here during the events of The Witcher 3, and he finds a city plagued by organised crime, religious zealotry, and bitter class division.

The city sits on the northern shore of the Pontar, at the point where the river empties into the Great Sea. While monster attacks are a problem for most settlements in the region, Novigrad is protected by impenetrable stone walls designed by architects from the Oxenfurt Academy. The city has no stationed army, but is watched over by the Temple Guard: a militant arm of the Eternal Fire with a reputation for abusing its power. Those great walls may keep monsters out of Novigrad, but it has plenty of its own.

Like any bustling metropolis, Novigrad is divided into distinct districts. And as you wander its streets, from the slums of Harborside to the mansions of Gildorf, you see a wonderful variety of faces; faces that reflect their surroundings and give the city its character. I recently walked the entire length and breadth of Novigrad, and the following portraits are of the people I met along the way, offering an intimate glimpse of life in the free city.

Located in the eastern part of the city, The Bits is an overcrowded district in the grips of extreme poverty. Ramshackle stacks of dilapidated houses lean over narrow, muddy side-streets, and it’s not uncommon to find yourself being attacked by desperate criminals. You’ll find thugs, beggars, and assorted ne'er-do-wells hiding from the Temple Guard here, but there are also flickers of humanity, including a school for orphaned children.

Putrid Grove is similarly impoverished, but has become a haven for non-humans and magic users, who live under the protection of Francis Bedlam, the King of Beggars. In his sanctuary you’ll see elves, dwarves, and humans living together, and mages plying their forbidden trade. This is the only place in the city where people on the fringes of society can live in peace without being hounded by the Eternal Fire's witch hunters. “They call this place the Putrid Grove,” the King of Beggars tells Geralt. “But it’s the rest of Novigrad that’s putrefied. This here’s the last bastion of normality, sanity, reason.”

Outcasts can also be found in Farcorners, a patch of farmland just outside the city walls. Although not completely safe from the prying eyes of the Eternal Fire, magic users and non-humans can find some safety here. Geralt meets a fugitive mage called Remi Villeroy, who fled with his family after the witch hunts broke out. Novigrad may seem like a shining beacon in war-ravaged Velen, but for some folk, life there is just as tough as anywhere else.

Of course, for others, life in Novigrad is sweet. Gildorf is the city’s most affluent district, elevated above the grimy slums below—both literally and figuratively. Here the wealthiest citizens live in opulent villas, relax in Sigismund’s Bathhouse, and engage in all manner of hedonism at the Passiflora, Novigrad’s finest brothel. There are no beggars or cutthroats here; just strolling nobles clad in fine, colourful clothes and a huge contingent of Temple Guards to keep the riff-raff at bay. Compared to The Bits, it’s like a different city.

Gildorf is also notable for its connection to Temple Isle via St. Gregory’s Bridge. This is the religious heart of the city, home to the Great Temple of the Eternal Fire. At the base of the tower, whose flame can be seen burning for miles around, you’ll find crowds of worshippers praying and priests giving passionate sermons. And, of course, the Temple Guard is out in force, making sure order is kept in this most holy of sites. But that hasn’t stopped Whoreson Junior, one of the city’s crime lords, buying a townhouse on the island.

Not every upper class citizen hides away in prestige districts like Gildorf, however. You’ll find the well-to-do mingling with the mucky rabble in the city centre—particularly around Hierarch Square. This busy marketplace throbs with life, with merchants, craftsmen, conmen, beggars, bankers, thieves, and nobles merrily rubbing shoulders. Just off the square is the famous Kingfisher Inn, a cosy tavern whose resident bard, the beautiful Callonetta, frequently brings patrons to tears with her songs of romance and adventure.

Industry is also an important part of city life, and some areas of Novigrad are devoted to commerce. Harborside is where ships come in from the Great Sea, bringing goods from faraway lands for merchants to sell in town. You can also find captains here who will, providing they have the coin, take travellers to places like the Skellige archipelago. The Golden Sturgeon is a rowdy dockside tavern popular with sailors looking to drink their shore leave away, including fist-fighting champion Georgius ‘The Piledriver’ Georg.

A network of canals runs through Novigrad, where locals will often be found fishing. And they sell their catch in the Fish Market district, a hub of merchants trading in fish and other goods. Traders are also present in Glory Lane, a district where Geralt can meet the master blacksmith Éibhear Hattori. Districts like these keep Novigrad’s economy alive, and provide a wealth of jobs for the common folk, even if the working conditions are often grim.

And all that money has to go somewhere, which is where Novigrad’s many banks come in. The Novigrad branch of the dwarf-owned Vivaldi Bank is on Hierarch Square, where Florens and Orens can be exchanged for Crowns, and loans can be taken out. Vimme Vivaldi runs the branch, who also happens to be one of the city’s most talented gwent players. While many dwarves are outcasts in the city, Vivaldi’s status and wealth protects him: an example of the injustice and hypocrisy that is sadly commonplace in Novigrad.

Novigrad is a remarkable place, with a rich culture and history that videogame cities often struggle to convey. Before I took this tour through its streets, I’d been in the city dozens of times before while playing The Witcher 3, but never really stopped to admire just how much thought and craft has gone into its construction. It’s evident in its design, and the design of its citizens, that CD Projekt RED’s artists and writers thought about the city as a real place, rather than just a cardboard set for the player to run around in.

I’m also impressed by how much personality the people have, even though you only catch a distant glimpse of most of them when playing the game normally. It was only when I made use of NVIDIA’s Ansel screenshot tool to take a closer look that I discovered this hidden world of detail. These faces say as much about the city as the streets and buildings, and I feel like you could write entire stories about every random NPC featured in these portraits.

So the next time you’re in Novigrad, get off your horse, switch off the HUD, and go for a long walk. You’ll be amazed by how much detail you miss when you’re busy questing and fighting, and how real the place feels when you really think about its layout and the people you see around you in each district. It's amazing to think that this hyper-detailed city is just one small corner of The Witcher 3's vast world, and it explains why the game took three and a half years to make. I can't wait to see the futuristic cities CDPR builds for Cyberpunk 2077.