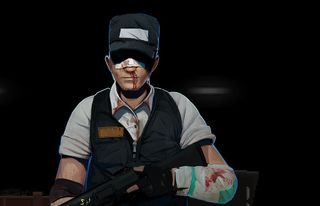 I still think there's life in the zombie apocalypse. I'm not sure what the idea to refresh the shambling undead will be, but maybe The Final Station's freight train is the thing to do it. I'd rather this than Fallout's Thomas the Tank Engine at any rate.

The Final Station looks like FTL by way of This War of Mine and Teleglitch. You ride a train through a dying world, stopping off at stations to gather supplies and more useless mouths to feed, provided you can fight through the infected hordes. There seems to be some pleasing nuance to the pixellated zombie combat. By the time you pull off again, you'll need enough food make it to the next stop.

That's the sort of focus that appeals to me in a survival game. Like Chris, I find the relentless, directionless demands of DayZ and The Long Dark's alpha sandbox exhausting after a while, so narrow windows to accomplish an objective and get the hell out sound divine. And that's my feature suggestion, if it's not already in—if you don't get it together in time, the train should leave without you, Stargate Universe-style. What else creates tension like a treacherous, ticking timer?

The Final Station is due sometime in summer, which is the accuracy I expect of most National Rail services.