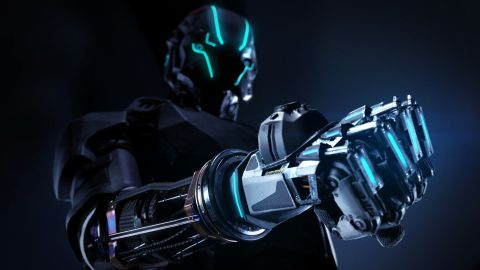 Espire 1's VR stealth is brimming with neat ideas, but the end product is slightly less than the sum of its parts.

If Espire 1 has taught me anything, it's that crouching is really hard work. Sam Fisher must have thighs made of concrete the way he scuttles around for hours on end. If Ubisoft had wanted to make a truly realistic stealth experience, they'd include a post-mission sequence in which Fisher has to rub Ibuprofen gel into his groin.

In fairness, Espire 1 doesn't simulate the chronic inner-thigh pain that must come with being a professional sneaky bastard either. This just happens to be a by-product of its concept. Finally, there's a VR game that lets you avoid detection by physically crawling through an oversized vent.

By all rights, this should make Espire 1 the most immersive immersive-sim ever made. Sadly, the reality doesn't quite live up to the dream. Don't get me wrong, Espire 1 has some neat ideas, and there are moments when its VR stealth simulation (quietly) sings. But it also lacks the level of mechanical finesse good stealth games need, resulting in an experience that frequently veers closer to Keystone Cops than Metal Gear Solid.

Espire 1 puts you in the role of an operative working for the Intelligence Force of Australia. The game starts immediately after an attack on one of the IFA's most secure research centres, which specialises in designing remote-controlled humanoid drones. Taking control of one such drone, your job is to infiltrate the facility, find out what the insurgents are doing, and stop them from doing it.

This slightly roundabout premise is necessary to explain Espire 1's unique approach to combating VR-induced nausea. In the game, your character is stood in a Minority-Report-like glass box, via which you control the drone telepathically. When you move the drone around (using standard FPS controls), the static box becomes visible in the periphery of your vision, while only the very centre of the screen maintains what the drone is seeing as it moves around.

These unique "comfort settings" do seem to succeed in reducing nausea by minimising the amount of movement in your peripheral vision. That said, I found the game to be relatively comfortable even with these settings switched off. As Espire 1 is a stealth game, you're frequently stopping to hide, assess guard patrols, and wait for the right moment to move, which helps reduce motion sickness anyway.

The core of Espire 1 will be familiar to anyone who's played Thief, Splinter Cell, Metal Gear, etc. As you explore the underground R&D facility, you'll need to avoid, distract, or eliminate patrolling guards. If they spot you, they'll raise the alarm, and you'll have to either run and hide until the alerts die down or stand and fight until there's nobody left to respond.

The potential for VR stealth gaming is immediately apparent. Being able to physically lean around corners to check they're clear is very satisfying, as is physically crouching when moving to reduce the amount of noise you make (although there is an optional crouch button if you want to avoid the risk of thigh-cramp). Espire 1 also takes advantage of verticality. Your robot's magnetic hands let you clamber onto any metal surface, enabling you to shimmy up the drainpipe of a warehouse and evade guards by sneaking along the rafters.

Espire 1 is at its best when you're in full evasion mode like this, clambering hand-over-hand on the underside of a metal gantry to avoid the sights of an automated turret. My favourite mechanic is how you activate your infra-red sensors by raising your virtual hand to the side of your head and pressing the trigger of your touch controllers. This instantly gives you a Predator-like view of patrolling guards. It's very cool.

This isn't where Espire 1's neat ideas end either. You can use voice commands to sneak behind guards and shout "Freeze!" holding them up MGS 2 style. Weapons are also fun to manipulate. The bolt-action tranquiliser pistol is cocked by physically retracting the bolt on the back, while conventional weapons can be quickly reloaded by holding the gun over the magazine holster on your off-hand side (Espire 1 lets you specify your dominant hand, which is another neat touch). You can even pull magazines out of enemy weapons for extra ammo, or throw them around the environment to distract enemies.

Espire 1 has all the right components. It just doesn't always fit them together especially well. The biggest problem is AI. Guard perception is highly inconsistent. You can be stood next to them and they might not see you, but they'll spot you up on a gantry on the far side of the room. The game needs a clear, MGS-style indicator of what enemies can see. Placement of enemies can also be problematic. Several times I opened a door to a new area and was immediately spotted. Elsewhere, I've been funnelled into corridors where there's no alternate route to help avoid detection. Compared to the best stealth games—Chaos Theory, Thief II and so on—the levels are not especially well-thought out, with too many open lines of sight and too few hiding places.

Combat, meanwhile, is the weakest part of the game. Your physical inventory is great in theory, but fiddly to use in practice. The pistol holsters are too far back, meaning I'd frequently go to grab my gun and miss, or grab my rifle from the chest holster by mistake. Also, nothing has any sense of weight to it. Guns feel like they're made of Styrofoam, while enemies crumple like wet cardboard when shot. The result is that combat is more absurd than it is thrilling, with you pole-axing a guard because you were trying to grab your pistol and accidentally chucked your assault-rifle at their head.

With more polished combat and more precision in the level design, Espire 1 would be a decent chunk of VR stealth. It's campaign lasts about six hours, with around twenty short challenge missions on top of that. As it stands, however, it's just a little too fiddly in execution for me to sneakily slip it a wholehearted recommendation.

Espire 1's VR stealth is brimming with neat ideas, but the end product is slightly less than the sum of its parts.