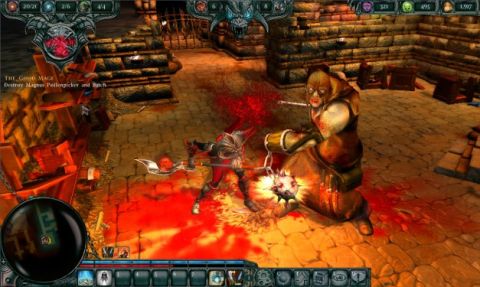 Wont stop you dreaming of Horned Reapers and Dark Mistresses, but still fills a gap thats been empty for far too long.

Some games wear their inspirations on their sleeves. Dungeons wears a Dungeon Keeper T-shirt, drives a red and black car with a 'I heart Dungeon Keeper' sticker on it, and visits a plastic surgeon every Tuesday to ask if he's ready to give it that Horned Reaper look it so badly wants. Just look at it. If it was any more of a copycat, you'd hear it meow. Except...

Against the odds, Dungeons actually turns out to be its own game too. The biggest difference is that your underground empire is now a dedicated hero farm, built specifically to draw do-gooders into your clutches and harvest Soul Energy from them. When they first enter, they're worthless. By sprinkling all the gold, treasure and monsters they can handle in their path, their Soul Energy bar gets nice and juicy, and only then do you drop the hammer on them – before they escape home with your treasure. Soul Energy buys Prestige, and Prestige unlocks new toys that help harvest more Soul Energy, helping you upgrade your dungeon to take on tougher heroes and assignments.

Heroes don't just get tougher, but also more demanding, with everyone from gold-hungry adventurers to outright masochists coming to see what you've got. You have to cater for them all, or they'll get fed up and start trying to destroy you – usually at the most inconsiderate of times.

It's a fun twist on the formula, with just two real issues. The first is that if you didn't know that Dungeons was a German strategy game, the amount of micromanagement you have to do quickly gives it away. There's so much to keep track of that it's very easy to miss something. Heroes, for instance, start off as a joke, but they level up fast and soon become a real threat, especially if there's a sudden turn in your fortunes like the arrival of a Champion or your boss demanding tribute.

Second, when things do go wrong, you're often low on tools. You can't simply dispatch a team of skeletons to deal with trouble near your Dungeon Heart, only put down spawn points in advance. Unlike Dungeon Keeper, you do get to control your Dungeon Lord directly, unleashing powerful attacks and spells against intruders; but there's only so much trouble he can bail you out of. Fallen behind? It's very easy to suddenly find yourself on the ropes and sweating. Sure, you can save yourself from much of the pressure by playing in one of the three Sandbox maps, but what sort of self-respecting evil overlord would ever admit to wussing out like that?

These things aside, Dungeons is a fun successor to the Dungeon Keeper legacy. It's similar enough to recapture the old spark, with enough of its own ideas that you won't feel like a traitor for playing it. It's not exactly the Dungeon Keeper 3 we wanted, but it is the only one we're likely to get.

Wont stop you dreaming of Horned Reapers and Dark Mistresses, but still fills a gap thats been empty for far too long.