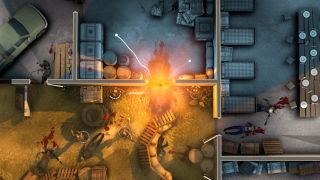 Doorkickers 2: Task Force North has been re-announced with a new trailer, bringing its unique simultaneous turn-based take on close-quarters tactics to the Middle East.

The game was initially announced way back in 2016 and due for release that same winter. That didn't happen, and it's taken until today, just over 3 years later, for the game to make a reappearance.

Fortunately, the wait won't be quite as long as last time, as developer Killhouse Games is planning to release it into Steam Early Access in Q2 2020, putting it anywhere between April and June.

At first glance, Doorkickers 2 doesn't look terribly different from the first Doorkickers: you plan how your squad moves from room to room, clearing enemies along the way, before committing to the actions. The catch is, you don't know what the enemy is planning to do, as their movements are being planned at the same time. To succeed, you need a bit of tactical thinking, a bit of guesswork, and a bit of dumb luck.

The big difference is in its setting. The shift from controlling a SWAT team to a Spec-ops counter-terrorism unit brings with it its own challenges, as well as new gadgets and weapons to play with. Double agents, disguised insurgents and innocents to be aware of will complicate missions, while the introduction of night-time and darkness adds a degree of stealth not found in the first game.

While not coming in the early access release, Killhouse Games has also said that competitive multiplayer will be coming for the first time in the series' history later on in development, joining the single-player and co-op play that will be in the game at launch.

As with the first game, there is also an emphasis on providing an endless stream of things to play through. On top of every mission being playable in both single-player and co-op modes, there will be procedurally generated levels, and extensive mod support—including "partial source code access"—for player-made content.