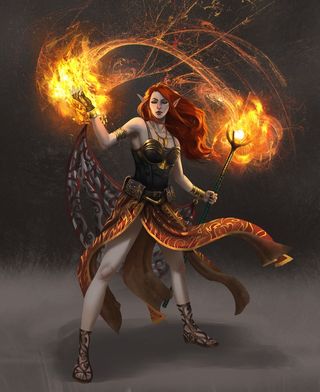 Strategic Simulations Inc. (SSI) was primarily a developer and publisher of wargames—hence its name—but in the mid-80s it hooked up with TSR to make Dungeons & Dragons-based RPGs, and for a lot of gamers that's what it's best-known for. And for good reason: The Gold Box games are still famous among aficionados of the genre, and the Eye of the Beholder series is an outstanding example of first-person dungeon crawlers. A number of veterans of those games recently formed a new company called Tactical Simulations Interactive (TSI) and they've gone to Kickstarter with a new RPG they say is very much like their old ones.

Seven Dragon Saga gives players control of six characters, the Touched, tasked by the Emperor with defending the lands against all threats. The first installment—presumably, the intent is to build the saga into a series—will take place in the wild Drakelands, which players must return to the control of the Empire through prowess, coercion, threats, or a liberal application of violence.

The TSI team includes Producer David Shelley, who worked on classic SSI RPGs including Pool of Radiance, Curse of the Azure Bonds, Secret of the Silver Blades, and Champions of Krynn, and Systems Designer Paul Murray, who shares those credits and several others. And that's the big hook here: The studio hopes that Seven Dragon Saga will be just one of several projects that will "recapture the magic of classic RPGs updated to modern times."

"We've been extremely encouraged and supported by the community so far, and Kickstarter is the right fit for us," TSI wrote in the Kickstarter pitch. "The game is already months into production but we're far from finished. As veterans of SSI, we remember the freedom of being our own publisher. Taking our vision and creating the best game possible is the primary concern." The studio is in the process of upgrading early game systems, and said the funds raised by the Kickstarter would go toward "much-needed programming, art, music, and sound."

The Kickstarter actually launched yesterday and, acknowledging the possible slight influence of nostalgia, I think it looks promising. And so far it seems to be doing reasonably well for itself, having pulled in $46,000 of its $450,000 goal. It runs until April 13.