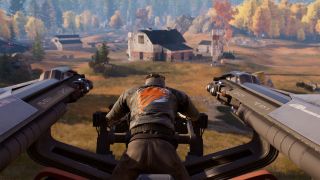 Back in July, Private Division and V1 Interactive announced Disintegration, a melding of FPS and RTS in a post-apocalyptic sci-fi battleground. If that sounds weird to you, you’d be correct. Genre labels don’t tell the whole story on this one. It’s definitely not the fast-paced action of Call of Duty or the galaxy brain strategy of StarCraft. In action, it’s a slow-paced shooter with a lot of lasers, emojis, and a surprisingly fleshed out story premise.

Here’s everything we know about Disintegration so far.

What is Disintegration’s release date?

No exact Disintegration release date has been given yet, but developer V1 Interactive is aiming for release between Q1 and early Q2 2020, meaning sometime in April or May at the latest. V1 did confirm the game is coming to PC, PS4, and Xbox One.

IGN recently got hands-on with Disintegration's singleplayer campaign and loved what they played. From what we can tell, the campaign will play just like multiplayer, except with linear maps and fewer battles with other grav cycle pilots. Sounds similar to a classic RTS campaign.

No new story info was revealed, but the gunplay is already looking better than it did at Gamescom 2019.

What type of game is Disintegration?

Developer V1 Interactive isn’t shying away from calling Disintegration an FPS, but it’s not that simple. Disintegration is a strange mutation of FPS and RTS sensibilities. Matches consist of player-controlled pilots in airborne “grav cycles” with AI soldiers fighting it out on the ground. Each player commands their own crew of AI soldiers while duking it out with other pilots.

Roles are determined by selecting a “crew,” which each have unique grav cycles and soldiers with different abilities. From what we can tell, Disintegration matches are 5v5. We’ve only seen the capture the flag-style Retrieval mode in action, but V1 also has plans for team deathmatch and a zone capture mode at launch.

Who is making Disintegration?

How to sign up for the Disintegration multiplayer alpha

V1 hasn’t given official word for when Disintegration multiplayer tests begin, but you can already sign up on the official website. You have to sign up for the game’s general newsletter, so expect to also receive informational emails and promotions.

Disintegration’s grav cycles are basically flying tanks, which means that combat moves at a slower pace than you might expect from an FPS. Pilots do have full 3D maneuverability and dodging moves, but War Thunder-style dogfighting this is not.

Despite its multiplayer sensibilities, creator Marcus Lehto is taking the development of Disintegration’s lore and world very seriously. Check out the reveal trailer, which introduces the protagonist, Romer.

In the current era of service games, singleplayer campaigns in multiplayer-focused games aren’t as common as they used to be. So it’s worth pointing out that, on top of post-release support for its competitive multiplayer, Disintegration will have a full 12-15 hour campaign that fleshes out its world.

After Earth’s resources have been used up and the planet is becoming increasingly unlivable, humans have begun voluntarily transferring their brain into robotic bodies, a process called Integration. Disintegration’s campaign stars an integrated former TV host named Romer, who leads a grassroots resistance against Rayonne, a military outfit of zealots bent on annihilating any humans who deny integration.

Transferring my brain to a robot body sounds alright, actually

Assuming the most crucial human senses are simulated well, being 80 percent robot sounds pretty good. Stiff joints could be remedied with a few drops of WD-40. I could probably lift a car. Plus no more annoying pee breaks? Robo me up, fam.

Disintegration was a pure RTS before it was a shooter

"The game actually started as a real-time strategy game—just straight out RTS—and we were like 'man there's way too many like this out there.' So we decided to add a first-person shooter mechanic into it, by turning the player into an active participant in combat. When we made the decision to add such a strong first-person shooter mechanic into it, but allow the player to tactically use that ground squad as part of their crew, we had to invent brand-new ways to engage with it."

That’s how V1 arrived at Disintegration’s interesting mix of FPS and RTS. Ordering units around is as simple as pinging in Apex Legends and ideally won’t interfere with what demands your immediate attention: shooting.

Disintegration’s crews have a lot of personality

Look at these post-apocalypse flyboys. Each crew has a distinct aesthetic that seemingly carries over into its play style. Though, you can notice some ability overlap as players cycle through the six crews available in the Gamescom build.

They also have some pretty good names, like Tech Noir, Neon Dreams, Warhedz, and The Sideshow (deadly clowns). King’s Guard is pretty dull as names go, but they’re literal knights with swords, so they get a pass. The story premise and reveal trailer suggest a fairly serious story, so I’m curious how that will jibe with the lighthearted theatrics of multiplayer.

Disintegration’s microtransactions are cosmetic only with no loot boxes

You’ll be able to earn cosmetic upgrades for your crews and grav cycles in game and through microtransactions. Sounds like pretty standard stuff, but I’d wager V1 will have loftier monetization plans if the game takes off.

Pilots can speak with emoji

You can dance in any game nowadays, but where can you project a holographic emoji to 👋 at your friends and 😒 at your foes? Disintegration, that’s where.

I mean...you see it too, right? As long as we all see it. I’m just glad a familiar style is integrating so well in another game.

To be fair, Lehto is very aware of the Destiny comparison and explains the similarities as a consequence of his work at Bungie.

"It’s a fair comparison to make, especially when you consider the fact that I was one of the core individuals developing the entire aesthetic style of Halo and a good bit of Destiny at the very beginning,” he said in an interview with Kotaku. “That’s my style, that’s my blueprint. It’s like what you’d expect from any good director: a certain kind of vibe from the movie that you’re gonna go see. The same thing is true with games. The kind of game I’m making is the kind of game I like making.”