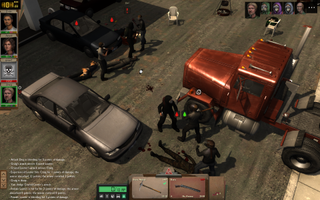 The zombie survival game Dead State was decent enough for Evan to choose it as his "personal pick" for 2014. But it clearly could've stood a little extra work and fine tuning, too. As he said in his review, it was "somewhat blandly presented and burdened by bugs." So DoubleBear Productions went ahead and did just that for an updated version called Dead State: Reanimated.

Dead State: Reanimated features major changes to combat systems and balance, as well as new AI behaviors for human enemies, enabling them to notice your presence more quickly and react to it more effectively. The new "PC Infection" option means your own character can, optionally, be infected as easily as any of your allies, and there's also a new Hardcore mode with more dangerous combat, increased resource consumption, slower healing, and lower morale. Reanimated also offers new areas to explore, plus new random encounters, combat sounds, animations, and even alarms in building that will attract all sorts of unwanted attention if they're tripped.

Things have been improved under the hood as well. "We’ve rooted out every crash and progress blocking bug to make sure you have the smoothest possible experience. Several popularly requested usability improvements have been added, such as friendly fire confirmation, looting piled up bodies, and an option to toggle Live Shelter movement on and off," the studio wrote. "Both allies and the undead have received major pathfinding adjustments that will reduce lag some people have experienced as well as make movement more consistent and natural."

Dead State: Reanimated is live now, and will be a free update for anyone who already owns the game. A full list of changes is posted on Steam.