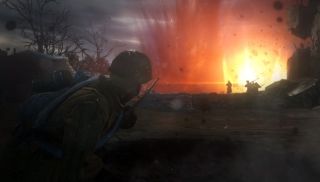 Earlier this week, we detailed the planned fixes and features of the free Company of Heroes 2 update, Turning Point. Now, Relic have announced Victory at Stalingrad, a DLC pack that will launch alongside the update, bringing new co-op and solo challenges, and three AI battles. Set in the Winter of 1942, it covers the Soviet counter-attack battles of Operations Uranus and Little Saturn. And yes, I've only highlighted those names in a crass attempt to encourage comment thread jokes.

"Take command of the Red Army in a series of scenarios, challenges and battles based on this historic victory. Your strategic decisions will lead the Soviets from the jaws of defeat to a crushing victory." Oh no! Not the crashing jaws of victory defeat!

Victory at Stalingrad will launch 12th of November, and be priced at $9.99.