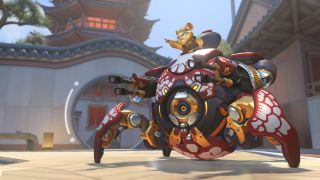 Yesterday, Blizzard announced that it would be implementing a new hero ban system in competitive play, but it wasn't the system a lot of players were hoping for. Instead of letting players choose hero bans themselves on a per-match basis, Blizzard will make the choice for us in what it calls a 'Hero Pool'. Every week, Blizzard will make one tank, one support, and two damage heroes unavailable to play.

To understand why, we have to go back a few years to when Blizzard announced that hero switching would be a core component of the game. Compared to other games like Heroes of the Storm and League of Legends that lock you into playing a single character for an entire match, the concept seemed strange at the time (assuming you never played Team Fortress 2). Since you can't see which heroes you're playing against before a match starts, you have to counter the opposing team on the fly. And unlike in competitive Heroes of the Storm and League of Legends, there's never been a player pick/ban system in Overwatch.

However, with the ever-increasing number of heroes and maps, hero switching became an issue for two reasons, even in quick play: Some players would often switch off support roles, leaving their team without a healer, while others would stick with one hero, even if that hero clashed with the team composition and wasn't effective against the other team or on a particular map.

The 2-2-2 role lock (two tanks, two damage, two support) solved one of those issues, but the meta became stagnant, which is the main reason Blizzard is implementing this pool ban. In short, the problem right now is that players pick specific team comps on specific maps because that's 'what works.'

On maps with bottlenecks straight out the gate, like Dorado, Eichenwalde, and King's Row, it's become increasingly common to see Reinhart, Orisa, and Baptiste camping on or near the payload with shields and immortality field up. Bastions wait quietly in hard to reach places on maps like Hollywood and Watchpoint: Gibraltar, positioned perfectly to take out the entire enemy team in seconds, sometimes with a pocket Mercy. And heaven forbid you go up against a Soldier 76 and Baptiste when both have thrown down their ults. I know, because I have been that person. Role lock hasn't stopped that sort of thing from happening.

With the meta so stale, I'm glad Blizzard is finally creating a ban system to fill in the problem gaps the role lock didn't. But for now, I'm wondering why Blizzard won't put ban decisions in the hands of the players. Does Blizzard not trust its Overwatch players?

A pick/ban system gives players the power to block comps they don't like, like the Rein, Orisa, and Baptiste combo. Players will likely change their bans depending on the map, as some heroes are better suited for certain ones over others. Given that Overwatch players know what map they are going to play before they pick their heroes, they could tailor their choices in that way.

From the way Blizzard described the pool ban system, it seems like maps aren't taken into account, and that will naturally favor some players and teams over others. With role lock on top of the pool system, players who are best with one class or a small number of heroes may end up frustrated when their specialties are off the table, especially if their opponent's preferences are unaffected.

I get that Blizzard wants to shake up the meta and force 'one trick' players to branch out of their comfort zone, but week-long bans mean competitive players who favor certain heroes will have to either sit out for a week until their heroes are back in the pool, or struggle with a hero they are less familiar with. Players whose strongest heroes are banned right at the start of a new season will have to wait a week to complete their placement matches, too, and hope that they have a better pool in the next week.

If this is how it's going to be, I just hope that Blizzard creates pools designed to limit the dominant comps. Turning away from the tried-and-true pick/ban approach feels needlessly controlling, but the goal of hero bans is to make competitive Overwatch less predictable and more exciting, and if the pool system accomplishes that, it'll be a success. If not, I suspect Blizzard will be hearing a lot of noise about its decision to maintain control over the Overwatch meta.