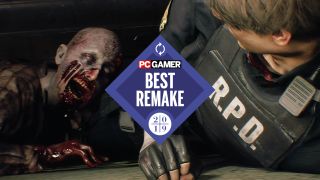 Wes: This is just primo Grade-A Videogame, right here. Capcom updated a classic, tightly designed game with smooth modern action and managed to retain the low-level anxiety and occasional bursts of terror that early Resident Evil excelled at. As Resident Evil got bigger and more bombastic, it lost what Resident Evil 2 did so well: Give you an explorable space small enough to keep in your brain as you explore. That's what makes it so pleasurable to crisscross the police station, opening up new paths between rooms and solving goofy puzzles. It remains a tight game, finishable in 10 hours, but with enough secrets and weapon choices to be fun a second time through.

The commitment to the original is really impressive, here. With such a vast leap in graphics technology, there must've been some temptation to make RE2 more serious and realistic; to make its police station a less absurd blend of practical spaces and absurd puzzle situations. But despite how serious Leon comes off in cutscenes, the fun, oh-so-videogame-y feel remains in the exploration and puzzle-solving. And the new graphics tech really does add a lot. The gore detail is genuinely grotesque, and the lighting kept me on edge even when I knew there shouldn't be any zombies around.

It's a shame Capcom didn't make Claire and Leon's campaigns more distinct, but that's the only weakness of this remake. For the most part, RE2 Remake is better because of how restrained Capcom was in adding to what already worked.

Andy K: This return to a smaller, more considered Resident Evil is the best the series has probably been since its PlayStation heyday. More than just a retread, Resident Evil 2 takes the essence of the 1998 original and transforms it into a fresh and excitingly modern game. The floppy, unpredictable physics of the zombies make for some brilliantly dynamic combat, with the shambling creeps tumbling down stairs when you shoot their legs off, or falling into each other creating a slapstick domino chain of undead. And the increased presence of Mr. X, the fedora-wearing giant, is a welcome change, with the sound of his distant, pounding footsteps creating a powerful sense of dread. I wouldn’t say Resident Evil 2 was scary, but it’s impossibly tense, especially when you’re low on health and ammo.

Tom: The police station is a deeply satisfying space to explore. The game tails off a bit after that big opening section, but it's a beautiful nest of interlocking corridors full of threats and secrets. Capcom has done a great job of modernising Resident Evil for 2019. The game has the over-the-shoulder Resident Evil 4 perspective, but uses it to create claustrophobic horror. Bullets are precious, the zombies are persistent, and the scares are legit.

Nostalgia is a powerful emotion, and Capcom could have just released another 'remaster' with higher resolution backgrounds. Instead the devs dug deep to capture the essence of the original game and transform it to cater to modern tastes. I'm glad that Resi 3 is getting the same treatment. Resi 2 has set the bar for what a modern remake should do for a famous old property. I'm glad to see that it seems like the Final Fantasy VII remake is going down a similar route. I'd like to see a world with fewer remasters and more thoughtful remakes like this.