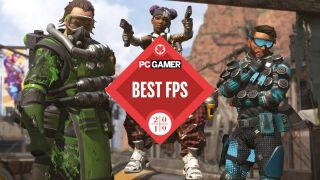 Evan: A year in, it's the athleticism of Apex Legends that elevates it above its FPS and battle royale peers. Apex contains a decathlon worth of verbs: crouch-slides, dropship nosedives, trampoline leaps, zipline ambushes. These moves aren't gimmicks, but tactical and expressive maneuvers that service the inherent fun of transitioning between biomes while under fire: adopting a better defense by zipping your friends to a higher elevation, pulling off an #epic Kraber headshot while sledding your body down a glacier, or simply crouch-sliding between a set of supply bins so your looting is three seconds more efficient.

This is a shooter about the urgency of movement. But it's also meaningfully slower than games that make up its DNA, like Call of Duty. Because Apex's time-to-kill is one of the longest in the genre, gunfights aren't merely a contest of who sees whom first. A clash with an enemy squad can unfurl into a multi-minute storyline with clutch revives, smoke-grenade misdirection, artillery area denial, tactical armor theft. The big, come-from-behind moments where your squad ekes out a win are mind treasure.

We can't forget Apex's ping system, of course—an innovation that peers like Fortnite have already absorbed. This contextual system allowed me to find moments of chemistry with total strangers, to assemble back-to-back wins with people who didn't speak my language. I think Respawn might be good at making video games, guys.

Phil: The ping system might be the best FPS innovation of recent years. Obviously it's an essential part of play when I'm with a matchmade team—giving ad-hoc teams a suite of contextual communication options that enable cooperation between total strangers. But also, it makes me a more efficient teammate when I'm playing with friends. As someone who too frequently makes calls like "players over there", as if my teammates should be able to intuit where I perceive "there" to be, the ping system augments my imprecise speech with precision markers. The specificity of it just makes everything much easier—like being able to mark specific loot drops that I already know are of interest to a member of team. Forget other games: I want to have Apex Legends' ping system IRL, too.

Wes: Everything Evan said about Apex Legends reminded me of why I stopped playing it shortly after launch. It's all true—I just didn't have the skills to pull off an epic slide-into-headshot or clutch revive or perfectly timed flank. Not only does Apex allow for (and demand) elite FPS skills, but it mixes that with the tactical awareness required to be good at a battle royale. You have dozens of opponents, on a huge map, that could be coming at you from any direction. Just trying to decide when to engage and when to retreat gives me the sweats. It may be out of my depth, but I'm thrilled to see such a good competitive shooter focus on prolonged, tactical matches over the near-instant deaths of so many modern military FPS games.

Evan: It's interesting to hear you say you bounced off Apex's skill ceiling like that, because compared to Call of Duty (unforgiving respawns, lower TTK, killstreaks) and Fortnite (endless building!) Apex is a significantly less intimidating FPS, for me. It's true that Apex lacks a true support role to invite other types of players. Everyone is expected to contribute offensively by dealing damage—this isn't Overwatch, where you can heal people just by rollerblading in their general vicinity. But that gets me thinking about the future of the genre, and whether we'll start to see those kind of combat-adjacent roles emerge in BR as games like Apex try to maintain their audience against endless competition. I hope Respawn is able to keep momentum on the game in 2020—dropping a new map in the year of its release was an aggressive move.