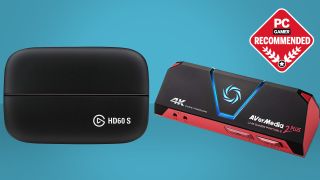 It’s fall, which means there are tons of video games coming out, and that if you’re planning to stream them, you might also be thinking about picking up one of the best capture cards for PC. A capture card is one of the first, least risky investments you can make to step up your Twitch and/or YouTube game: It lets you record or stream consoles through your PC, bypassing restrictions imposed by those tools, and allowing you to customize your frame-up in OBS or XSplit. If you’re already pretty serious, it also allows you to set up dual-PC streaming, which helps your broadcasts run smooth.

Our pick of the best gaming monitors to buy in 2020

The best capture card for you, specifically, will depend on what kind of content you plan to make. Are you streaming or recording footage to edit later? Some recorders are better for one or the other. Video resolution, particularly for streaming, varies from card-to-card. We recommend most people look for 720-1080p—there are also good 4K capture cards, but they’re expensive and most people aren’t streaming a ton of 4K video. Most capture cards also come with some kind of software: While most streamers use some form of OBS or XSplit, video work is nothing if not unpredictable so it doesn’t hurt to have a good software as a backup.

In general, our selections cover a few different scenarios, but we leaned toward recommending as many good all-around options as possible. You never know what kind of content you’re going to want to make in the future, so these cards will hopefully prepare you for anything. If you’re picking up a capture card as part of a larger build for a streamings setup, take a look at our picks for the best webcams and the best microphones for streaming.

The best capture card for newcomers

This is the perfect card for anyone wanting to get their gameplay online with as little hassle as possible. Elgato are experts in their field, and the HD60 S proves it; reasonably priced and simple to use, it’s probably the best place to start if you’re new to streaming. Crisp 1080p recordings at 60fps are a feather in its cap, while USB 3.0 connectivity is a happy bonus. Built-in software to get you up and running seal the deal. In fact, the only downside would be the card’s fairly limited editing suite—it’s not much good for anything beyond trimming video. However, it does have ‘Flashback Recording’ to help you retroactively capture even if you forgot to hit ‘record’.

Straightforward and reassuringly unsubtle, the Live Gamer Portable 2 Plus packs smooth 60fps and 1080p recording, 4K pass-through so you can still play in ultra HD (even if it’s not captured in 4K), USB 3.0, Mac compatibility, and dirty great flashing lights to tell you if you’re capturing or have left HDCP on. Besides an attractive form-factor with black casing, red trim, and neon-blue strip lighting, it packs intuitive software for live editing and the ability to record straight onto a Micro SD card if you’d prefer to keep your HDD clear of space-absorbing video. This is a capture card with flexibility, particularly if you record on the go. It works straight out of the box too—always a plus.

A great card for pros, although it won't do 4K

If you want to take your recordings to the next level, Elgato’s internal HD60 Pro card is a good shout. Indeed, their website claims that this card features “an advanced, onboard H.264 encoder that enables you to record unlimited footage in superb 1080p [60fps] quality, at a bitrate up to 60Mbps.” Not too shabby. It can also stream at 1080p when using Game Capture HD, OBS Studio and Xsplit. Petite, classy form-factor are in the HD60 Pro’s favor as well. At around $150/£150, it’s a sound option that gives great results for less.

Admittedly, the one downside to the Razer Ripsaw HD is that it's not the Elgato HD60 Pro. It doesn't have its own proprietary software, so you're forced to use OBS or subscribe to XSplit. On the other hand, many people prefer those wares to Elgato's own, and most of us use those third party applications on our own volition. And because it doesn't have its own software, the Ripsaw HD also supports built-in, easy to use audio mixing with the help of its hardwired, "hassle free" mic and headphone jacks. For the price, it also has the best picture quality.

Although it's still limited to 1080p streaming and capture, the Ripsaw HD lets you experience your favorite games—while streaming or capturing—at 4K 60fps. This ought to appeal to PC gamers who want to share their gameplay online, but don't want to miss out on the top-notch visual fidelity ushered in by their expensive and powerful graphics cards.

For pro-users who will settle at nothing but the best, Elgato’s 4K60 Pro is your jam. Even though it needs a high-end PC to get off the ground, this is an excellent piece of kit for those who are set on capturing gameplay at the highest resolution and frame rate possible.

Although it’s wise to make sure you’ve got enough space on your HDD for all those videos as well, the 4K60 Pro has an encoder to reduce file size and save you much-needed memory real-estate. Oh, and one more thing: the best way to play while using this card is with a lag-free HDMI passthrough that shoots the feed to a 4K screen or second monitor.