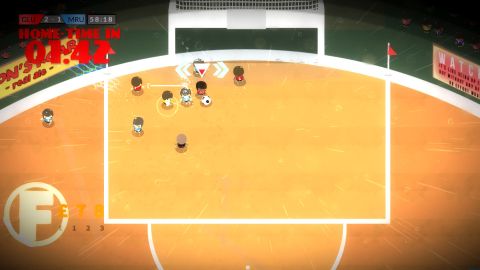 A misguided attempt at parody, underpinned by a poor sports game by anyone’s standards.

Parody in games is a notoriously tricky art. Far Cry 3: Blood Dragon is probably the most famous and recent example. It made jokes about how boring tutorials were in games, but still made you sit through boring a tutorial in telling it. This at least had the benefit of the game underneath being great—if you don't have that, there's even less point in making the joke to begin with.

So here we have Behold The Kickmen, a football game from Ben Here, Dan That’s Dan Marshall, a man who fully confesses to knowing nothing about, and indeed vehemently disliking, the sport of football. The joke is there for all to see. Unfortunately, that premise is represented entirely by the game’s mantra, ‘Do A Goal’, a phrase that’s like nails down a chalkboard for any of the millions who do enjoy football.

Behold The Kickmen is a kind of hybrid of Speedball 2 and Sensible Soccer, run through the filter of a mild superiority complex. Football as a sport and as an industry is ripe for parody and indeed ridicule, but Behold The Kickmen aims its sights less at the things worth poking fun at—braindead post-match interviews, preposterous coverage, endless tabloid snooping—and instead lays into the sport itself, and its fans.

If the jokes were particularly insightful or funny, then there would be a foundation to work from here. You’re asked to name a team, and then battle your way up the ‘Big Boring Football Spreadsheet’, by taking on rival teams one after another, and ‘doing more goals’ than them to ‘win the sport’. It’s the same level of humour as people who post up a picture of Big Ben on their Instagram and say ‘London, I am in you.’

In between each match, a story plays out involving your chosen star striker and his protracted falling out with a player from Brazil United, who win the World Cup every year. There are actually glimpses of the flair of Ben There, Dan That in the writing here. When Behold The Kickmen is less interested in targeting the world it's parodying, and just concentrates on a bit of character and word play, it’s much more appealing.

Sadly, things just fall apart on the pitch. Behold The Kickmen is a kind of sluggish chaos, where the actually-quite-charming little footballers run around after the ball like school kids, but are slowed down into treacle-sludging zombies the second they gain possession. Passing is indicated with a line drawn between two players, but is almost impossible to guarantee the direction you actually kick the ball—indeed, it often goes backwards. You can shoot by charging up a pass and use aftertouch with the right stick (a controller is recommended), but most goals come from the extreme ineptitude of the ‘goldkeepers’ (yes), rather than anything resembling efficient play.

The occasional times Behold The Kickmen impresses is when it does successfully ape football, when you do manage to string a few passes together and ‘do a goal’, something that's been enjoyable in pretty much every football game since the Spectrum. There’s even a tackling system that shows genuine promise: charge up your slide as you aim for the ball, release the tackle, then hit the button again to immediately gain possession. Unfortunately, it just slows an already sluggish game into a crawl.

Behold The Kickmen isn’t nasty, it's just smug. It’s funny enough to have a new offside rule which awards a red card to any player stuck in the ‘wrong’ part of the pitch when a timer runs out, but this comes in place of an actual offside rule. It means there’s almost no way of stopping the opposition strikers from hanging out in front of your goal and scoring at will because the AI isn’t smart enough to get in the way. Maybe that rule isn’t so daft after all.

Perhaps the humour will appeal to those who genuinely dislike football. The game barely costs anything, so even if you did fancy jumping in for the gags, it’s not a huge investment. Even if the jokes do appeal to your sensibilities, though, I can’t possibly recommend a game that’s bogged down by such a mind-numbing version of the sport. A straight red card.

A misguided attempt at parody, underpinned by a poor sports game by anyone’s standards.