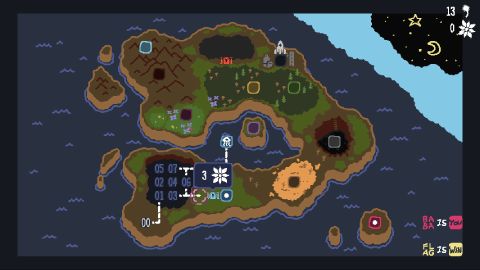 Baba is You manages to take the familiar idea of nudging blocks and solving puzzles in a fresh direction. Brilliant.

Baba is You, and its developer Arvi ‘Hempuli’ Teikari, found themselves in the spotlight after a build of the logic puzzler won over IGF Award judges in 2018. With nominations in four of the eight categories, Teikari beat out the likes of Into The Breach to take home the Excellence in Design award as well as pocketing the Best Student Game prize. Now the full release is here it’s easy to see what the fuss was about.

Baba is You is a spatial word game, of sorts. It combines programming-style commands with Sokoban-esque block pushing to create hugely inventive and varied puzzles. By rearranging the blocks with words on them you can issue new rules for the world or find new ways to interact with the space. You can even totally rewrite the win conditions for a level.

It’s an easier concept to understand by playing than talking, so here’s an example. In one level you start as a rabbit in a walled room. Inside the room with you are three text blocks—“Wall”, “is”, and “stop”. They’re connected in a straight line so the walls currently stop your character from passing through them. If you nudge any of the blocks out of line the walls no longer stop you and you can walk through them.

The blocks which make a win condition for the level aren’t yet connected in a line. The simplest solution to that is to push the blocks marked “flag”, “is” and “win” into a line. After that, walking to the flag will complete the level.

But there are other solutions which immediately start to show you how many possibilities the system involves. You could mix blocks from the first and second room to write “Wall is win”. That lets you finish the level by touching any of the walls.

A third solution is to make use of the blocks which determine your avatar – they read “Baba is you” in a vertical line. Don’t disconnect them, otherwise “you” no longer exist in the level and cannot interact with it. But you can use “Baba” as the start of a horizontal command, a bit like a programming crossword puzzle. Write “Baba is win” and it makes you (Baba) the win condition of the level. There’s so much potential and it’s so satisfying!

If you put yourself in an impossible situation—for example, disrupting the set of blocks which tells the level what you are and triggering an existential conundrum – you can either go back a step (or as many steps as you need), or reset the whole level and start again.

It’s an absolute delight. Some levels feel a bit overwhelming but you soon get into the habit of reading them. For example, commands jammed into a corner can’t be moved so they act as basic truths for the scene, narrowing down the possible solutions. If there’s space next to them, that might be a hint that you can modify them with an intersecting command. The puzzles then become manageable (even if they’re still daunting).

The difficulty curve for the earlier worlds feels a little scattershot, but that’s largely because players grasp different solutions at different rates which makes accurate difficulty curves something of an elusive target for logic puzzles. That settles down after a couple of worlds and I’m now at the point where I’m gradually chipping away at later-game puzzles, rotating through them in the hopes that when I come back to a previous level I’ll see it afresh.

The aesthetic is simple and works better for simpler levels. When there are a lot of commands at play it can be hard to keep them all straight, especially when they’re spread out in corners of the screen. Pausing lets you recap the rules currently active, which helps, but the process adds mental load.

One of my favourite moments came after the introduction of the “Has” block which adds the concept of objects containing other objects. Manipulating that command to cross a river was a low-key moment of real joy! The addition of “not”, on the other hand, filled me with deep horror.

Baba is You deserves its critical acclaim. It’s part logic puzzle, part existential quandary, part love letter to how much potential is contained in the tiny building blocks of language.

Baba is You manages to take the familiar idea of nudging blocks and solving puzzles in a fresh direction. Brilliant.