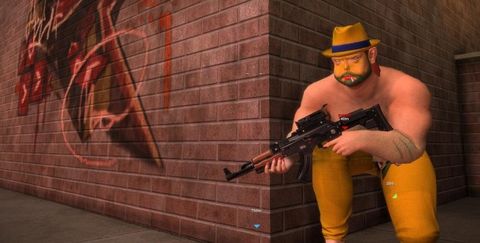 Reloaded has recreated APB, but reined-in its ambition, inheriting most of the same problems for a better price.

Not revamped, not rejigged, not redesigned. Reloaded. APB's new suffix is apt, as this free-to-play reincarnation of 2010's deflated cops and robbers MMO is a retread of the same ground. The same drab city, the same hollow combat, the same lopsided results.

The original city of San Paro has been left standing, a monument to badly judged level design and the colour grey. The first game's devs, Realtime Worlds, intended the place to live and breathe. Instead, it spluttered a few times before its life support failed. Its resurrection is a miserable one.

Reloaded's missions usually pit two small squads of human-controlled criminals and enforcers against each other, asking them to perform a multi-stage series of mini-jobs. One team has to drive to a place, collect a thing, and deliver it somewhere else. The other team has to stop them. Occasionally this leads to the kind of scenes that flicker through the minds of non-players when you describe APB to them: high-speed chases through busy streets, lastsecond jumps into getaway cars.

These do happen more regularly than before – little adrenaline shocks to punctuate hours spent bumbling around between jobs. More often, playing Reloaded's missions is like beating your head against one of San Paro's flat, grey concrete walls.

Mission locations are invariably overlooked by high ground. The first team to occupy that ground is the de facto winner, possessing sufficient cover to pop anyone who comes close. Grenades can't flush them out. Well-versed players will simply set up camp in an unassailable location and sit out ten minutes of screaming frustration. San Paro is so full of hiding spots and high ground that it's far easier to put someone else's mission under lockdown than it is to complete your own.

Urban renewal doesn't seem to have been high on GamersFirst's list of priorities: APB had the same spatial problems, and the same tiresome missions. The new devs have instead focused on the economy. Reloaded is free to play, supported by item, modification and vehicle sales, as well as a premium semi-subscription option. Steer clear of the latter and you get obnoxious little reminders telling you what you could've won in XP and in-game currency if you'd stumped up the cash.

GamersFirst's best work can be seen in the driving, which is much more responsive than before. Players had to apply for planning permission if they wanted to turn in APB's starter car; Reloaded's is nippy and accelerates quickly, losing out only over distance. Top-tier cars clock in at around $15, making their purchase just about reasonable. Better wheels can be earned with repeat play, and are available from mission-giving vendors for in-game cash.

Guns are cheaper – around $5 – and can be loaned for a month at a time. Lifetime access is more expensive, but players wielding chunkier weaponry have a notable bonus over skinflints. Playing with the default Star 556, I was ineffectual even at mid-range, where the weapon is meant to shine. I tried a scoped-up AK47-analogue, and was cutting down enemies in half the time. There's little connection between weapon and world, and still no headshots. Bullet barrages inexplicably kill some players in milliseconds, then it seems to take multiple clips to down others.

Most of APB's problems remain in Reloaded. It even inherited a few new ones, as it is currently seeded with cheaters. The original game was arguably killed too soon, so the switch to free-to-play means interested parties should at least take a weekend city break back to San Paro. But this is no revitalisation – APB Reloaded is rehash, replication, and repetition.

Reloaded has recreated APB, but reined-in its ambition, inheriting most of the same problems for a better price.