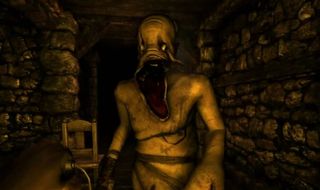 A few weeks ago, Amnesia developer Frictional Games started teasing something on a website that's been dormant for four years—a pulsating neuron. Then that neuron grew, transforming into what looked like a cell, still pulsating. And now it's undergone yet another change, kicking off an ARG.

The cell is now an embryo, seemingly human, but there's another new addition to the site. Spotted by Foxnull on ResetEra, the social media icons now include an eye-shaped interloper. Clicking on it does nothing, but hover over it and you'll spot part of a YouTube URL.

Here's what it conjures up:

An old recording of some rocks, along with a strange symbol doodled in blue chalk. There's some accompanying text that says it's a video cassette from February 16, 1983 that's part of a private collection.  "Marked Shetpe, KSSR," it ends. KSSR is an acronym for the Kazakh Soviet Socialist Republic, now the Republic of Kazakhstan. Shept, meanwhile, is a village in Kazakhstan.

Frictional has also hidden a second URL on the site, which reveals another YouTube video, which this time contains no footage.

It seems to be the remains of an experiment that was deemed a "partial success". There's only audio, and it sounds very ominous. There's the buzz of electricity, then some inhuman wailing, and then it thankfully ends. The text suggests that someone was running experiments on an artefact known as the 'Triple Crown' but provides no more details.

So! We've got an embryo, weird artefacts and Kazakhstan. There's no much of a common thread yet, aside from all of the teasers creating a sense of unease. There's a slight Control vibe, with the experiments and weird objects, but Frictional isn't giving much away yet.

Take a look yourself and see if you can find more clues.