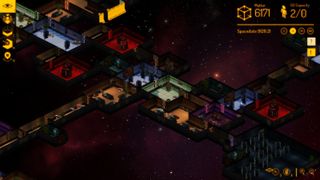 With the overwhelming success of Minecraft and the large number of games in Steam's Early Access , there's an increasing number of interesting games that don't fit neatly into reviews and previews. They're tough to preview, because everyone can buy and play them; they're also tough to review, since they're constantly changing. Consider this new column, Alpha Test, a guide to sorting through this. We'll take a snapshot profile of specific Early Access or public beta games, examine what they're planning on doing next, and round up news about specific games.

Spacebase DF-9 is the perfect inaugural game for this column. It's got a marvelous premise—a more accessible, science-fiction Dwarf Fortress where you build a space station and then laugh as the crew all dies via some bizarre accident—and the Double Fine pedigree to go along with it. But it's also in alpha, and is very clearly under development. The bad news is that if you buy Spacebase DF-9 right now, it lacks the depth to be a truly great strategy game—the good news is that what exists is a strong foundation for future additions.

You start a game of Spacebase DF-9 with a handful of crew members with which to build a new space station. First they build an airlock and oxygen recyclers, and from there, a base filled with dormitories, gardens, refineries, and bars. Over time, new ships will show up with new crew members, or new bases/ships attached to your own, or enemies trying to take over. Or all three of those. It's a simple, strong strategic loop: new crew members appear, you assign them jobs to build infrastructure to support themselves, which gives room for new crew members, and repeat as necessary.

What makes Spacebase DF-9 and other similar games stand out is that you exercise only indirect control over your crew members. You give them, jobs, yes, and you choose the things you'd like to have accomplished, but you can't move them directly. So if you want a new room to be built, but your builders are all sleeping, eating, or socializing, you just have to wait. In that space between that the crew is supposed to do and what they're actually doing, stories happen: a technician fails to repair a oxygen recycler, which leads to a fire. The fire burns breaches the hull, with sucks the oxygen out of the entire station. Builders are busy sleeping, don't fix the breach, and everyone dies. Hooray!

Spacebase DF-9 is great at developing these crisis situations, and the precarious nature of a tiny, self-sustaining space station works well thematically with this style of game. At a technical level, I was impressed by just how stable and complete the supposed alpha of the game was—it was ridiculously easy to sink an hour or two into a new space station every time I opened the game. My complaints were mostly with quirks. For example, the crew AI also has strange priorities: I built a bar at a tiny new station outside my main station, which attracted a pair of bartenders who slowly starved to death. They never made their way back to the main station for food--this lemming-like lack of survival instinct is common, for example, even when the base loses oxygen, the crew never tries to use space suits “indoors.”

There are some interface quirks as well. Construction of new objects is frustrating—it takes four clicks/hotkeys to add a single door, which quickly gets repetitious. I also had more than one occasion where parts of my base behaved as though there were a hull breach, with oxygen levels plummeting quickly and crew being pulled in certain directions, but I couldn't find an actual opening. But other than that, the various different parts of the game all functioned together and gave enough information to be playable and interesting, which is the most important thing a strategy game needs to do.

The core problem when playing Spacebase DF-9 is that there aren't multiple layers to the strategy. As of right now, that game loop of add-crew/expand station/add crew is essentially all there is to the game. In other words, the game gets larger, but not more complex. For example, newly arriving ships are essentially the same whether you have a crew of three or thirty—a larger station would have a much tougher time of dealing with ten new arrivals, or a pirate raiding party of half a dozen. Or perhaps having multiple crew members with expertise in certain jobs could open new building opportunities.

Happily, one of the other reasons that Spacebase DF-9 is a great inaugural choice for this column is that its website is quite transparent about its future plans . The most recent patch added food and gardens, but and near-term stuff includes further areas of complexity, like crew members having possessions which will require storage space. The long-term plans include ideas that I find particularly exciting: references to Crusader Kings II in terms of administrator ambitions and crew member relationships show a direction that could turn Spacebase DF-9 into a classic if everything goes well.

But for right now? Spacebase DF-9 is a game that's oddly both ready to play and nowhere near complete. I'll certainly be keeping track of it with every major update.