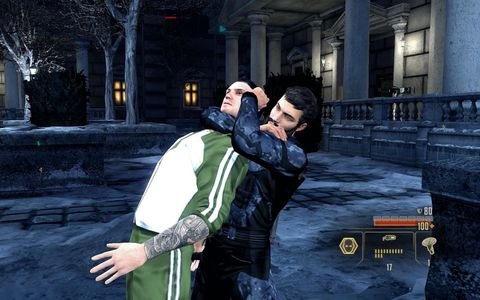 The combat and final mission are weak, but the story strands that bind it all together are excitingly unique to each player.

You called it Alpha Protocol ? Really? With a name that bland, Obsidian may as well have titled their spy-RPG Beige Patrol . For an audience coming straight from another Splinter Cell, Alpha Protocol's anonymity doesn't help it stand out.

But then, like the espionage operatives it depicts, standing out, guns blazing, isn't Alpha Protocol's thing. This is a roleplaying game, so resolutely tied to its system of numbers, statistics and perks that the blandest of names even has a little sub-heading: 'the espionage RPG.'

Against the quickfire combat of Sam Fisher's deniable adventures, the action side of Alpha Protocol is clunky; but when married so closely to hard numbers and dialogue choices, Obsidian's adventure becomes a tense, subtle story.

Stepping into the super-sneaky stealth shoes of agent Michael Thornton, as a proof of my skills I was tasked with escaping from the facilities my new employers, Alpha Protocol, called home. AP's remit is the USA's dirty work, and as a group they're free to be liquidated at will.Once acquainted with the team, it's off to Saudi Arabia for Thornton's first proper assignment. With a jumbo jet swatted from the sky by American missiles, apparently pilfered by terrorist group Al-Samad, Alpha Protocol sails close to the wind of believable modern topics. Big business is firmly in the game's sniper scope – fake hypercorporation Halbech is a constant in Thornton's quests: the weapons contractor that made the planewrecking rockets in the first place. Similarities to real companies like Halliburton are obviously no coincidence, and Halbech's influence throughout the world is, with an eye to spoilers, less than benign.

Come at the game like a pure shooter and Alpha Protocol is simplistic. Weapons have their own quirks: line up a pistol shot, and after a moment the reticule will turn red, giving a critical hit. Yank out a shotgun and you'll get a bonus for clearing a room, successive buckshot twatting foes with more force each blast. The problem is, such is the innate RPG-itude of the game, it's all too easy to mentally superimpose little numbers ticking away over your foe's heads.

Considering the game takes pains to introduce your Thornton as a prodigy, it's confusing to work out quite why his myopia hasn't been diagnosed correctly on one of his company physicals. My Mike was a pistol specialist, having deliberately ramped up his shooting hand to off targets quickly. Great at 15 feet, where a headshot meant goodnight goon, but beyond that and he had the aim of a standard Bond henchman.There is some good in the floaty combat: an impressive weapon customisation system will, if the right elements are combined, let you upgrade guns and armour. Sidearms have four slots in which to cram technology – either bought from the 'Clearinghouse' black market or nabbed on-mission – and these make a notable difference to a weapon's handling. Body armour can be purchased and then lined with various gadgets, boosts, or armour plates: want to be the spy world's Rambo? You can purchase clanky soldier armour, and stuff it full of ceramic pads to deflect bullets aimed for your vitals. I went a different route, pocketing a silencer for my handgun early on, and combining it with futuristic stealth armour that muffled any loud movements.Theoretically I had no protection against gunned-up guards who spotted me; realistically, my gameplan meant they never would. Thornton's background is selectable, the choice between soldier, spy or techy informing how far you can progress in certain skills. Plumping for the spy lifestyle, I had my action points pre-spent on the skills that'd assist in my chosen approach, filling the stealth and close-combat areas of Thornton's character sheet.

Some skills are selected via a radial menu, lasting a short period when activated. Combine a few powerful ones and you feel like the incontrovertible badass an international man of mystery should be. My absolute favourite abilty, born of pumping my action points (obtained by levelling up, which is in turn accomplished with experience points) into pistol-slinging, is the 'chain shot'. It slows time to a crawl to allow me to line up a series of snap-shots. Once the timer ticks down to zero, Thornton fires, dropping an entire room of goons in a heartbeat. Used sparingly, it's a moment that leaves you clapping for more. Lean on it – or other powerful skills – too heavily though, and it's worryingly easy to get into gamebreaking territory. I wangled the game to let me off some of the beefier bosses before they'd even finished their taunts, turning invisible before walking up to them and plugging them in the head.

[MPU]These bosses are a confused presence in Alpha Protocol. The game quickly splits into three locales – Rome, Taipei and Moscow – and they feel like they've been developed by three separate teams. Rome is all grey haired men and believable targets, while Moscow has surprise appearances by mafia major-domos who've wandered off-set from Metal Gear Solid. Trying to square a tense, low-key cafe discussion in a Roman cafe with a break-in at a tracksuitwearing, coke-snorting superhuman disco fan's neon mansion in Moscow is tough, given the general gravitas of the central plot, with its themes of patriotism and betrayal.

A few characters came close to breaking the game's spell, but the central cast is quite strong. Any game depicting a shadowy world of anonymous grey-haired men has its work cut out trying to make those men anything other than grey, but Alpha Protocol's operatives, doubleagents and mercenaries present unique fronts. Thornton keeps dossiers on each, repositories of incidental information about their background, but also handy tips to keeping them on-side. Knowing whether a contact likes you to engage them with a direct offer or banter first usually elicits a better response than pissing them off; on the other hand, the game is at pains to suggest you deliberately stay on the bad side of some of those you run into, to approach missions in a different way.

The spies of life

This choice is Alpha Protocol's core strength. Several missions offer you two black and white options and make you live with the consequences. Dialogue choices, too, kick you down different paths, invisible game voodoo closing off and opening further options as you either tell a counter-agent how you're going to kill him, or join his side. Conversational options sometimes feel unexplained, oneword descriptions like 'suave' are not enough to plot what your Thornton will say. But at least tense dialogue standoffs give you blunter descriptions: the consequence of selecting the “fuck off” option is not hard to discern.

The way you approach a mission affects your standing in other areas: throughout the meat of the game, I kept a low, non-lethal profile, killing a grand total of three people before reaching the final mission (which, reminiscent of Obsidian's previous work on KotOR 2 , is rushed and shonky, forcing you to face waves of baddies who can magically spot you). Rocking up in a new safehouse, I was met by many contacts, each of whom referenced my awesome hideability. By telling you that the region's super-spy only noted you'd turned up on his turf after you presented yourself to him, the game makes you feel like an actual espionager. Of course, go in guns blazing and you'll be spotted, your conversations changing accordingly.

Either way, you're left with mucky hands at the end of the game. The choices Mike's forced to make aren't plotted against any kind of good/evil scale and there's no real way to 'ace' the game: any way you slice it, people get hurt, things explode, bad shit goes down. A news report plays over the final credits, detailing the publiceye- view of the events you've been involved in, piecing together the outside perspective and showing your actions – however noble in your eyes – as seen by the wider world.

A playthrough of Alpha Protocol is an intensely personal thing, implicating you in believable events that take their cue from current issues and poking away until you confide what you'd do in that situation. Even with clunky gunplay and an artistic blandness, Alpha Protocol's spy simulator envelops the player in a story that feels entirely of their own creation, and is all the more compelling for it.

The combat and final mission are weak, but the story strands that bind it all together are excitingly unique to each player.