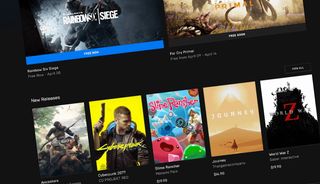 The Epic Games Store saw some significant improvements in September, including the addition of a list view in the library and a playtime counter, so you can see how much time you've sunk into Control. (37 hours here.) Bundles are now officially supported, as seen in the recent Batman trilogies, and patch size improvements mean smaller downloads when games are updated.

It's a good start—the list view is especially welcome—but even bigger things are on the way. Epic announced today that it's working on a new storefront for the Epic Games Store that will support "curated collections" and other features.

"You'll be able to see what games are trending, filter by genre, and more, so that you can find games you'll love faster and easier than before," Epic said.

An in-game overlay is also on the way, although it sounds like it's still in the conceptual stage at this point: "It'll be a while before it's fully realized but our thoughts here are centered around giving you ways to interact with your Epic Games store (e.g. library, social, etc.) while in-game."

Smaller new features planned for the future include support for 3D Secure in Europe to comply with requirements for Strong Customer Authentication, and support for the Thai language. Traditional Chinese support was added in September.