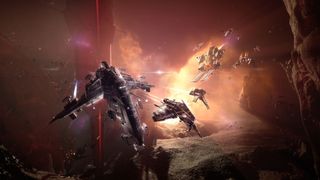 EVE Online hasn't quite become EVE Offline, but for many players in US timezones it might as well be. For nine days and counting, the MMO's US servers have been choking under the onslaught of a DDOS attack, leaving the in-game chat service largely inoperable for players who manage to log in. Many can't even do that, hitting an "unable to login" screen. CCP Games reports both issues, as well as lag and disconnection errors for players who are able to connect, are ongoing, with no ETA for when they may be resolved.

DDOS attacks and downtime are bad news for any MMO, but are especially bad for EVE Online, with its complex, player-driven economy. Players in some parts of the world can login just fine and are unaffected, while others have potentially been cut off for more than a week. The US seems especially impacted, but there are also posters in an issues thread on the EVE forums from Australia, Africa, and elsewhere reporting lag and broken chat.

"This is rough on people who are trying to defend or fuel structures and it's not being experienced evenly across the EVE universe," says player Carneros, CEO of The Bastion alliance. "There are people who are disconnecting and are unable to do their 'space jobs' which is resulting in some persisting effects that would be very hard for CCP game masters to reverse in any way."

Frustrated players on Reddit talk about canceling their accounts or demand compensation for not being able to log in for days. But as Carneros points out, the impact of some players being cut off is potentially costing much more than a week's subscription.

"We're currently fighting at an extreme handicap (to put it lightly) vs an invasion of our region. We're unable to properly defend stuff or contest hostile actions which is crucial in the beginning of a conflict," says player Lord's Servant, the co-leader of Forsaken Empire. "The hostiles have been able to establish themselves in a week in our region because we've been mostly unable to login and contest things like we normally would."

Lord's Servant explained the impact of the DDOS in detail in a lengthy reddit post, pointing out how damaging it can be to smaller alliances. Because many members couldn't log in to participate in a battle, they've lost ground that should have been easily defended.

"This is an issue that we have no control over, and no amount of ISK, in-game skill, or mechanics will allow us to do anything if we cannot log in or play the game in a reasonable state," they elaborated. "We've tried everything we can in-game."

Some players are speculating that the issues aren't from the DDOS attack itself—which may or may not still be ongoing—but rather from the mitigation service used to prevent a DDOS from completely crashing servers. Many have successfully logged in using VPNs set to regions outside the US. Whether or not the attack is still happening in full force, players on Tuesday are still experiencing the same range of issues: severe lag and broken in-game chat, if they can log in at all.

"We are working closely with our partners to improve the situation across the board for everyone affected. Please continue sending your reports to us," reads the latest EVE Status tweet.

Of course, it wouldn't be EVE without a few theories that this entire incident is part of someone's master plan. "Tinfoil hat time, maybe the Russian groups are the ones behind the DDOS because they want some easy sov," writes one Redditor. Others suggest it's a Chinese plot to prevent the spread of information about Wuhan and the coronavirus. Whether they're able to play the game or not, EVE's pilots remain very much On-Line.