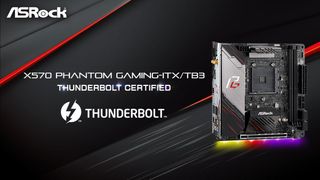 ASRock finds itself in a braggadocios mood because it has just done something that no other motherboard maker has—it received Intel's official blessing for Thunderbolt host connectivity on an AMD-based board.

As is the case with many other AMD motherboards, ASRock's X570 Phantom Gaming-ITX/TB3 sports a Thunderbolt 3 port. However, none of those other motherboards are certified for Thunderbolt. Intel has been stingy with the Thunderbolt protocol, and up until recently it wasn't keen on allowing vendors to offer their own Thunderbolt hardware.

According to our friends at Tom's Hardware, Intel stopped being stingy with the Thunderbolt protocol in 2019, when it decided to allow the USB Implementers Forum (USB-IF) to oversee the latest specification. This was part of an effort to expand the availability of Thunderbolt 3.

Ever since that happened, vendors have been free to produce their own Thunderbolt controllers.

"The key feature of this motherboard, Thunderbolt 3 technology, enables lightning-fast data bandwidth up to 40Gbps, and can also provide both data and video transmission. Meanwhile, X570 Phantom Gaming-ITX/TB3 can connect up to six Thunderbolt 3 devices such as graphics cards, hard disks, or monitors simultaneously by means of daisy chain technology," ASRock says.

Thunderbolt 3 operates over a USB Type-C port, but its 40Gbps of bandwidth is twice as fast as the speediest USB 3.2 Gen 2x2 standard (20Gbps). The bi-directional standard also separates itself by allowing for user to daisy chain up to six devices.

An interesting side note to all this is the upcoming USB4 (no space, for whatever reason) standard. Intel made the Thunderbolt spec royalty free, and USB-IF pounced by officially injecting it into USB4, so that all USB4 devices and ports will support Thunderbolt devices.