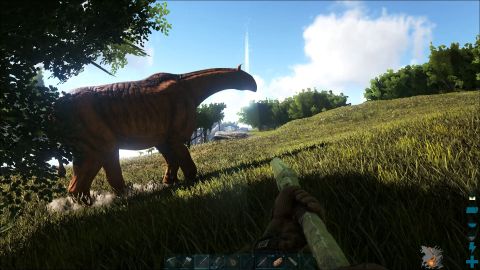 A bloated, grindy mess, but so packed with options that a better game is hidden inside it.

Waking up in Ark: Survival Evolved is a bit of a jolt. Lost and naked, new players open their eyes on the shore of an island teeming with dinosaurs and a wild, hostile ecosystem. Ark is an open world in the truest sense: there's nowhere I need to go, nowhere I'm supposed to be. But I can't just starve to death on that beach, so I set off.

More than two years after it emerged as (yet another) open-world survival hit, Ark has finally launched. We're still learning how customer-funded, Early Access development affects games, but for Ark the flush of money and attention seems to have led to an unbalanced game with too many extraneous features and unrefined, unfocused fundamentals.

In the jungle, I tear a branch off a tree, tie it to a rock, and then I have a stone axe. Basic tools help me get more trees and rocks, bootstrapping my way up through the history of human-made technology. Unlike many other survival games, Ark's exploration of technology goes all the way: that stone axe eventually leads to rocket propelled grenades, industrial forges, and forcefields.

Whether I'm wearing a hat made out of grass or steel, my goals in Ark are essentially unlimited. Like many of the best PC games, Ark asks me to set goals for myself and be the author of my own stories. I can climb the biggest mountains, I can become a big game hunter, or I can tame my very own pterodactyl and take to the skies.

I decided I wanted a nice little house on a cliff overlooking a waterfall, so I set up camp, built storage containers, and started stripping the hills of wood and stone. I laid foundations and raised walls until, hours later, I stepped back and admired my little slice of the world. Feeling a sense of agency in the world sent me into Ark with the same obsessive abandon that drew me to games like Minecraft or The Long Dark.

But the ugly side of this freedom is Ark's environment itself. It is incredibly stingy with resources, and it takes a lot of time out in the open, where death lurks around every corner, to farm up enough material to do anything. More than upgrading tech and building homes and riding dinosaurs, this is the angry core of Ark: everything takes resources; gathering resources takes time; at any moment, death will destroy everything.

It took me a long time, maybe around 30 hours, before I had enough resources to make backups of my most essential items. In those first 30 hours, there were a few times where I lost absolutely everything. Once, I was out hunting with a tamed raptor when a wild, high-level carnivore killed us both, then camped out, chewing on our corpses. I spawned at my home nearby, with no weapons or tools and only a few minutes before my body disappeared and all of my best gear was gone forever. No matter what I tried, I couldn't get past that raptor. Finally I saw my first corpse fade away and I died again, respawning naked at my base. My pet raptor was dead and I was without so much as a sharpened stick to my name.

Feeling real fear in a game—fear of failure, fear of loss—can be really fun. Escaping that fear can be dramatic, and the tragedy of almost getting away can be unforgettable. But when so much of Ark is grinding drudgery, the consequences of its unforgiving style are hard to enjoy. I walked out of my wooden house, tore a branch off a tree, tied it to a rock, and made myself a new stone axe. It was a bitter moment, and I'm not sure I can recommend it.

Between the grind and the death penalties, Ark just doesn’t respect a player's time. Taming dinosaurs, one of the game’s most enjoyable activities, is perhaps the most offensive time sink.

To tame a dinosaur, you knock it unconscious and give it food to nurse it back to health—I guess dinosaurs have a short memory. Taming your first pet is a really cool experience. Though it's a little boring to stand around and watch a sleeping dinosaur wake up, it only takes a few minutes. Having a pet is really awesome in Ark, and it's amazing how quickly I bonded with my dino-pals. I tamed my first raptor, named him after my dog (naturally), and then the raptor and I went hunting. Wounding my quarry with an arrow and watching my raptor chase it down and kill it came with a joyous sense of friendship and power.

At higher levels, though, taming animals becomes a joke. Animals can take hours or even days—according to actual, real-world clocks—to tame. According to one online animal-taming calculator, some high-level animals could take you over a hundred real-life hours to tame: start taming that beast on a Tuesday, and it might be ready to ride into battle by the weekend.

That kind of round-the-clock commitment is clearly impossible without help. I suspect Ark's worst grinding mechanics are designed to push players into playing in tribes online. Though abundant, these servers can be really hit or miss. On PvE servers, the biggest problem I had was that the spawn areas are really built out, full of fenced in compounds, stripped forests, and megastructures created by established tribes. It was pretty hard to find somewhere I could start punching rocks.

And on the PvP servers, the brutal grind and the fear of losing hundreds of hours of work brings out the worst in online behavior. Anyone who has ever played a survival game knows how frustrating it can be to get ganked by some higher level players. In DayZ, for example, it's really common for a pistol-wielding noob to die in battle against an established squad outfitted with rifles. While getting murdered by a high-level jerk sucks, that's what I would call 'normal' for these kinds of games. Surviving to become more powerful yourself is part of the fun, and the stories generated by these power disparities are partially what made the genre so interesting and popular. But at least in DayZ, both sides have invented gunpowder.

The huge tech disparity makes the PvP environment in Ark so much worse. Imagine this: you and your friends build a stone-age village with thatch huts and campfires. One night, you all get murdered and your village destroyed by a team of commandos wearing night-vision goggles and wielding assault rifles equipped with silencers and laser sights. That's not a way that I'm interested in spending hundreds of hours of my life.

The really frustrating thing about this state of affairs is that Ark began with a pretty simple pitch: it's an open-world survival game, but you're stuck in Jurassic Park. After more than two years of development with a hungry player-base, that straightforward idea became bloated and top-heavy with weird, irrelevant features at the expense of sorting out the basic mechanics.

Here’s my favorite example of feature-bloat in Ark: a camera. I can decorate my home with painted canvases, but after I craft a camera I can snap pictures, print them, and hang the canvas on my wall to showcase a nice sunset vista. That's a cool idea, but it’s far, far away from the essence of what makes a survival game fun. Survival games are about perseverance in the face of scarcity, but in Ark it takes more refined metals to make a camera than to invent the concept of firearms.

For a game spent more than two years in Early Access, it still has a lot of bugs and missing basic features. Pathfinding for dinosaurs, both wild and domesticated, is really poor. The easiest way to take down a dangerous predator, in fact, is to run through some trees and watch it get stuck.

Ark’s performance also suffers, though I don’t know if that’s due to feature bloat or just a lack of optimization. Running a singleplayer game locally, the only issue I’ve seen a lot of is textures that are slow to load and dinosaurs popping into existence right in front of me. Online performance varies wildly depending on the server, but even on servers with a good connection, I noticed long lag times between moving an item and seeing it change in my inventory and dinosaurs that take several seconds to notice that I’m attacking them. Mega-structures built by powerful tribes usually load one or two chunks of wall at a time, with textures showing up much later.

And in my homestead one morning, I discovered that all of my furniture was permanently glued to the floor. If I wanted to move my bed from one corner to another or add a crafting table to a corner, I’d have to destroy it, lose most of the resources I spent making it, and just make a new one. Certain that I was missing some simple solution, I went searching Ark’s community wikis—there’s no in-game tutorials, so all useful information is maintained by players—only to find that people have been begging for this feature since 2015.

Instead of implementing this essential feature that games in this genre figured out seven years ago, Ark is full of cameras, cake, and wardrums you can bang on like bongos by pressing the number keys on the keyboard. It's hard to excuse something with missing or broken basic mechanics just because it's stuffed full of so much other stuff that just doesn't matter.

It’s easier for me to understand Ark less as a game than as a platform that hosts anything players can think of. As a game, Ark is more frustrating than great. But as a platform, it’s ambitious. Ark supports a huge community of modders who make it more focused and more refined.

Ark games also run on a deep menu of options. Most people won’t run their own servers, but if you do, you can change almost everything. Taming animals can be instant, resources can be plentiful, and all of the grind can be eliminated. You can even restrict certain technologies.

The ability to mod and customize everything, and the way that freedom has been embraced by the community, is Ark's biggest strength, and the primary reason I can recommend it. Right now, there are Ark servers are running Primitive Plus, an officially supported mod that keeps technology limited to the pre-metal age. Huge tribes ride high-level dinosaurs into battle with stone-tipped spears. Fighters dressed in leather and fur follow a charging triceratops as it charges through a wall, and a band of raptor-riding marauders raid deep into enemy territory.

Refined, large-scale prehistoric warfare is what I want from Ark, not the janky version full of bugs that includes tyrannosaurs with laser beams attached to their heads. But thanks to Ark’s community, I get to have both, and more. Primitive-tech-only servers, a PlayerUnknown’s Battlegrounds-style battle royale mode, and a boisterous role-playing community are just three examples of the way Ark’s players are using the game as a base for more interesting things. The long community-involved development cycle might have produced a bloated game full of mismatched features, but it has also built a population of players ready to take it upon themselves to make Ark into something better.

A bloated, grindy mess, but so packed with options that a better game is hidden inside it.