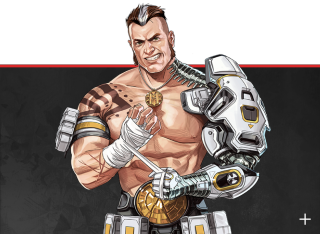 Who is Forge, and will he be appearing in Assimilation? Respawn has been causing quite a stir on the lead up to the release of Apex Legends season 4. James 'Jimmie' McCormick has been officially revealed, murdered and commemorated all within the space of a week, leaving everyone feeling a bit confused.

It looks as though Forge won't be joining the fray, as Revenant has now been confirmed as the new legend, but this entire affair has certainly turned some heads. It may have been difficult to keep up with the ever-changing season 4 news, but here's everything we know about Forge so far, including his abilities, release date and his backstory.

Despite being a very recent addition to the Apex Legends lore, Forge has had one hell of a turbulent introduction. Described as an 'augmented brawler', he was (until very recently) a big, muscular guy poised to enter the Apex games. The five-time Hyper-fighting champion was the first legend to have a corporate sponsor—Hammond Robotics—the same company that manufactures Titans in the Titanfall games. Judging by the launch trailer it looks as though this company will play a major part in the upcoming season.

The 'Up Close and Personal' clip depicts Forge in an exclusive interview in which he's singing the praises of his sponsor. That is, before the troubled new legend, Revenant, menacingly appears behind him. The animated interview concludes on a sinister note as we see Revenant plunge his arm into Forge, splattering blood over the interviewer.

Following the interview, Forge's death box appeared in-game. Located in the Sorting Factory on the World's Edge map, players can take a closer look at the interview setting. Interacting with his death box will reveal the 'Steel Cut' Commemorative Charm that players can pick up. EA's website was also briefly updated to memorialise Forge. His faded image was displayed on the website, accompanied by "RIP JIMMIE ‘FORGE’ MCCORMICK. Never defeated (except for that one time)." Revenant has taken his place now.

Is he really dead, though?

Fans have taken to the internet to discuss whether Forge really has departed for good. Some have highlighted Forge's choice of words in his interview, as well as keywords in the 'Steel Cut' charm's description as clues that he may still be alive and kicking. The general theories outline that Forge's appearance in the interview features visual discrepancies when compared to his official legend artwork. Combine this with his charm description that states he was "often imitated" and we've got a potential decoy Forge on our hands.

Would Respawn go to these lengths to bamboozle everyone once more? Moy Parra—Senior Animator at Respawn— tweeted confirming that Forge is "super duper dead". Naturally, portions of the Apex Legends community are still rejecting that he's really gone. It's quite a bold move to reveal a character only to brutally remove them a few days later.

Very little was divulged regarding Forge's abilities in Respawn's Reveal Devstream. His imposing metal arm certainly enforces the fact that he has a "mean left hook". Before his image and description were removed from EA's website, Forge was credited for using "his size, strength and heavy-duty Shatter Gauntlets to batter his opponents into submission".

Dataminers have previously reported six potential abilities buried in Forge's game files. These have not been confirmed by the devs so they may not be accurate. Anyway, here are Forge's leaked abilities, shared by That1MiningGuy:

If I were to hazard a guess at how he would feel to play, I imagine he'd be similar to Doomfist from Overwatch. Both have heavy cybernetic gauntlets and a similar build. Taking the rumoured abilities into consideration, each share a ground slam ability and perform well in close proximity combat. Following his death, it's unlikely that players will get to see any of these in action, but it's interesting to see what could have been.

Revenant is the headlining season 4 legend, so don't expect to see Forge anytime soon, if at all. His short story took some tragic turns and all focus appears to have shifted away from him, now. Season 4 begins on Apex Legends' one-year anniversary on February 4. Here's everything we know about it so far.