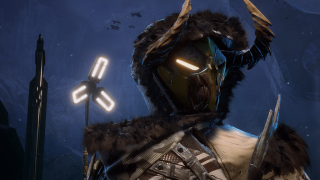 It came to light last week that the holiday decorations are still up in Anthem, taken by many as evidence that BioWare had fully abandoned its big bomb multiplayer shooter. In reality, it was intentional: The studio announced in January that it was extending the holiday event through February, and that two new Icetide armor sets were being added. Carrying a 2019 seasonal event through February 2020 isn't normal, but it wasn't the signal that BioWare had walked away from the project that some took it to be.

BioWare recommitted to the future of Anthem in an update posted today, in which general manager Casey Hudson confirmed that a major overhaul, which was first rumored in November 2019, is in fact in the works. But it's also still a long way off.

"Over the last year, the team has worked hard to improve stability, performance and general quality of life while delivering three seasons of new content and features. We have also heard your feedback that Anthem needs a more satisfying loot experience, better long-term progression and a more fulfilling end game. So we recognize that there’s still more fundamental work to be done to bring out the full potential of the experience, and it will require a more substantial reinvention than an update or expansion," Hudson wrote.

"Over the coming months we will be focusing on a longer-term redesign of the experience, specifically working to reinvent the core gameplay loop with clear goals, motivating challenges and progression with meaningful rewards—while preserving the fun of flying and fighting in a vast science-fantasy setting. And to do that properly we’ll be doing something we’d like to have done more of the first time around—giving a focused team the time to test and iterate, focusing on gameplay first."

In the meantime, Anthem as it stands will continue to run with events, store updates, and "past seasonal and cataclysm content." But seasonal updates, which replaced the "acts" structure last fall, are apparently being dropped.

What I find particularly interesting is Hudson's implication that the development team didn't have the opportunity to test Anthem to the extent that it wanted. BioWare said in early 2019, just ahead of Anthem's launch, that the public demo "exceeded our expectations," but that was focused on technical operations—stability and performance, basically—rather than gameplay. A closed test a month ahead of that demo went less well, and led Tim to say (very prophetically, as it turns out), "My nagging worry has been that BioWare is not really a combat specialist by trade, and this genre of game absolutely requires a satisfying combat loop if players are going to grind it indefinitely."

There's no time frame for Anthem's overhaul beyond the ambiguous "coming months," but clearly it's going to be a long-term project, and I wouldn't be surprised if this is the last we hear about it for quite awhile as BioWare goes heads-down on the job. Hudson said that the next in-game update to the current iteration of Anthem will arrive later this month to mark the first anniversary of its release.