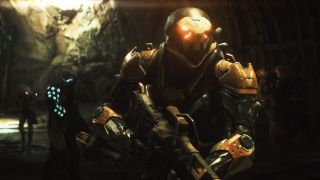 Ben Irving, the lead producer of Anthem and the "face" of the game since long before its release in February, has announced that he's leaving BioWare for a job at another developer.

(1/3) After 8 amazing years at BioWare I have made the decision to move on and have accepted an exciting opportunity at another gaming company. Since the first time I played Baldurs Gate many many years ago, BioWare was the dream place I always wanted to work.August 15, 2019

"I will forever be grateful to all the people who gave me the chance to work on great products with amazing people. I believe Anthem has a bright future—there is a great team working on it and I look forward to following its progress (and playing it!) from the sidelines," Irving wrote.

"I have really enjoyed interacting with the Anthem community—Streams, Twitter and Reddit. Through the good times and the tough times. You are all in great hands with @Darokaz [core community lead Jesse Anderson] and @UNTDrew [Bioware global community lead Andrew Johnson] (and have been for some time now). I wish nothing but the best for all of you. Ben."

Irving didn't reveal where he's going, but his departure may result in some concern within said community. BioWare finally launched the long-delayed Cataclysm earlier this month, and the reaction appears to be muted: Not exactly negative, but not particularly enthusiastic, either.

Electronic Arts has vowed to stick with the game and so far it's stayed true, but losing the head guy on the development team in the midst of efforts to turn things around—especially when he's going to do the same kind of work, just somewhere else—isn't the sort of thing that automatically inspires long-term confidence.