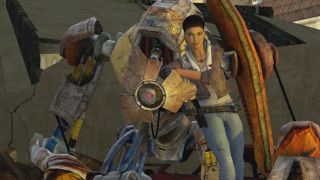 Find previous editions of the PC Gamer Q&A here. Here are some highlights:

- What game did you finish despite hating every minute of it?
- What's the most underrated game on PC?
- What's your least favorite entry in an otherwise good series?

With the announcement of the Nvidia GeForce RTX series of graphics cards, which boast fancy ray-tracing tech that makes things reflect other things extra well, we're thinking back to the leaps in graphics tech of old—the stuff that boggled us when we first saw it, no matter how mundane it seems now.

There's some nostalgia to it, because with graphics tech as advanced as it is now, we're typically more focused on art and design than, gasp, mirrors that actually have reflections in them. Not that the former is a bad focus for criticism at all—there's much more to say about it—but it was fun to gawk at screenshots in magazines, amazed by such miracles as curves and faces that almost look like faces.

For this week's Q&A, tell us in the comments which game made your eyes bulge the most at the time, even if it looks like old salami by today's standards. Our answers are below:

It was the D-day level, of course. I'd never seen that many soldiers on-screen at once before. You instantly bought into the drama of the setting—it marked the moment games got so good at mimicking war as portrayed by Hollywood that it was scary to watch. But also amazing, as a piece of work.

I played it round a friend's house, and he had a much better PC at the time, which can't have hurt. If I booted it up now, I'm sure it'd look like a Gerry Anderson production compared to the last CoD.

Unreal was the first time I realised how powerful lighting can be when it comes to the atmosphere of a game world. Even running on my old Pentium II with integrated graphics, that first mission where you escape from the crashed starship was stunning to look at. The flashing lights, jets of steam, and shadowy, oppressive atmosphere of the level was incredibly immersive. And then you escape and find yourself on a weird, vivid alien planet, which seemed to be designed purely to show off every cool graphical effect the new Unreal engine could pump out.

I was playing a lot of PlayStation games around this time too, and Unreal was so far beyond anything Sony's then-cutting edge console was capable of that it made it look kinda primitive and stupid in comparison. Unreal looks rubbish now, of course. But that'll happen to all the fancy new games you think look good now too. One day you'll look back at Cyberpunk 2077 and wonder why people got so excited about it, before jacking back into your GameMatrix 3000 and beaming a searingly photoreal Grand Theft Auto 8 directly into your cerebral cortex.

There's a bunch of games I could list here—hell, the switch from isometric to third-person convinced me that Little Big Adventure 2 was some photorealistic fantasy marvel—but I think my most acute sense of wonder came from Rockstar's open world sandbox. I think I'd convinced myself, in part thanks to the first two GTA games, that it would be impossible to create an entire city in 3D. But the scale of GTA 3, and its (at the time) dark, grimy streets and buildings, made it one of the most immersive games I'd ever played.

Looking back, it seems absurd to think such a blocky arrangement of polygons could feel so real, but, despite looking many orders of magnitude better, GTA 5 now doesn't fill me with the same sense of awe as GTA 3 did back then.

I think with certain games you actually feel something close to love at first sight. From the instant I saw Syndicate I knew I wanted to spend every spare second playing it. Which was a problem for me, as it was running on a friend's PC at the time. Every aspect of the design felt perfectly realised: the agents' menacing trenchcoat swagger, the startling minigun carnage, the use of 'persuaders', and of course that fixed-view isometric perspective that begged you to dive in and explore each toybox of a map. No idea if the Wachoskwis actually played it, but I a big part of me still thinks The Matrix doesn't even get made without Syndicate existing.

I was late to the Half-Life party, having first played the original game in 2003 on my PS2. I played Half-Life 2 on PC the following year, and, bloody hell, did it look good. Everything looked so vibrant and colourful and real. The scale of City 17 and beyond blew me away too, particularly against the first game's sprawl of claustrophobic corridors. Likewise, Half-Life 2's ragdoll physics were like nothing I'd seen before—which were best showcased with the upgraded gravity gun in Nova Prospekt, or while plummeting from the top floor of an HL2: Deathmatch multiplayer Killbox.

Of course, loads of games have used Valve's Source Engine since, but nothing has excited me quite as much as Half-Life 2 did at launch.

Myst made my eyeballs sing hallelujah. It was—hell, it is—a breathtakingly beautiful game: utterly alien but just familiar enough to draw me completely into its weird worlds, all of them rendered in sharp, sweet 'photorealistic' stills that wouldn't be out of place framed and hanging on a living room wall—a classy living room wall. And it moved! Not much, and Sirrus and Achenar's FMV gibbering seems hopelessly primitive now, but at the time it absolutely floored me. Myst outstripped everything that came before it, and even though it's long since been surpassed, the magic of that impact hasn't faded a bit.

Sometimes it's the little things. There have been plenty of games over the years that just straight-up wowed me, but I remember lusting after the level of detail in Tiberian Sun's graphics, after being obsessed with the original game. I don't even remember if it really looked that much better than C&C, but Tiberian Sun had bits of animation I found impossibly cool: the walking Titan mech and armored gates that would open to allow your units through. As a lifelong turtle, nothing made base-building more appealing to me than gates. I loved the hydraulic sound they made as they opened and closed.

Honestly I still get a little excited thinking about it. Like Tim, this love was problematic, as I could only see Tiberian Sun on a friend's PC. Mine wasn't fast enough to run it, and by the time my family got a better computer Tiberian Sun was old news, and we've moved on to Red Alert 2. But I did go back to Tiberian Sun occasionally, mostly for those gates and some sweet sweet mechs.