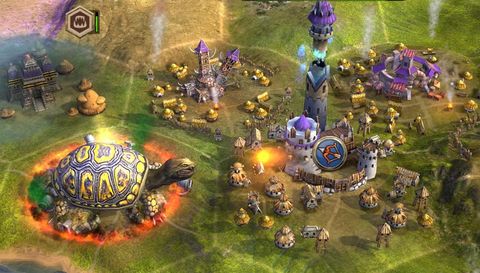 An entertaining and efficient strategy game that improves on its predecessorjust not all that much.

My empire is in ruins. It had such a strong start, too. My cities were spreading, my resources finely balanced, my army developing into a fearsome force of monsters and heroes. Now they're gone, consumed on three sides by the continuously spawning might of huge, armoured, fire breathing reptiles. I am defeated. By turtles.

At the broadest level, Warlock 2 plays like Civilization V with wizards. It's a hex-grid turn-based fantasy 4X in which you found cities, construct buildings, conduct research, raise an army and go to war against rival Great Mages. Instead of technology, there are spells; instead of wheat; there are Magic Fields; and instead of bandits, there's a menagerie, including werewolves, vampires, dragons and, yes, the mighty Great Turtle.

Yet the differences go beyond use of magic. It's more streamlined, with a greater emphasis on battle. Where Civ 5's bandits are more of a Band-Aid, livening up the early game, Warlock 2's unaffiliated foes are a constant threat—sometimes more deadly than your opponents. It pushes you into a more militaristic campaign. While a show of force isn't the only route to victory, neglecting your army is a sure way to lose.

If you've played the original Warlock: Master of the Arcane, this will all sound familiar. And if you've glanced over the screenshots, this will all look familiar. Warlock 2 does the sequel essentials—adding new races, units, monsters and buildings—but its changes are more subtle.

The most significant new feature is Exiled mode. It's a campaign in which each Mage is cast out to a small 'shard' dimension. Rather than exploring a single great landmass, here your empire must spread across multiple worlds as you cross through portals and work your way home.

In the sandbox campaign, these worlds fall on the wrong side of risk/reward—hiding valuable resources behind an absurd amount of monsters. Whenever I ventured into one, my armies were torn apart quicker than I could reinforce them. In Exiled, shards are smaller, and scale in difficulty as you move through the story. The focus becomes about exploration: working from forest world, to lava world, to death world, while methodically building strength, taking out spawn points and dispatching scripted bosses.

That's assuming you aren't stranded on the wrong end of a randomly generated map. During one attempt, my units were teleported to a section of an ice world surrounded by impassable terrain. Had it happened later, I could have used spells to flatten the mountains, or levitate them across the sea. Instead, I was forced to wait, while my opponents made use of their gifted advantage.

Exiled's strength is the way it encourages players to push forward. Progress means you're closer to victory, but also that your armies are increasingly stretched. An unexpected attack two maps behind your main force can require some inventive solutions. Spells can help, but do you summon up monsters, target with elemental damage, or hasten your troops and rush back to a city under seige?

For all the mode's triumphs, quests are repeated each playthrough, meaning the majority of my time was spent in the more dynamic sandbox. Here things are more familiar, focusing on relatively minor changes from the original game. The best is a new tech tree for spells, which gives proper progression to research. It lets you focus more easily on favoured strategies, whether that's terraforming tiles, doing direct damage, or securing passive bonuses to boost production.

The other significant change is to unit upgrades. Rather than specialising each city around the production of a particular unit type, Warlock 2's military buildings each offer a limited number of bonuses. It shifts building management to an empire-wide level, and stops the churn of ultra-powerful units that, in the first game, led to interminable late-game churn through an enemy's force.

While these are mostly positive changes, they're hardly dramatic, and they're offset by some lingering problems. The most notable is the AI, which across my campaigns would often fail to take the initiative. On normal difficulty, they'd instantly approach with non-aggression pacts and alliances, leaving me free reign to build and position my armies. To the game's credit, the campaign set-up options are flexible enough to mitigate this pacifism. In the end, I settled on the more aggressive opponents of a harder difficulty, but reduced the monster spawn rate to avoid a flood of turtle death squads.

These balance issues aside, it's easy to spend hours warring against fantasy factions. Warlock 2 is now the best version of an enjoyably streamlined strategy series. Unfortunately, for owners of the original, it isn't so much better that it's worth wholeheartedly recommending.

An entertaining and efficient strategy game that improves on its predecessorjust not all that much.