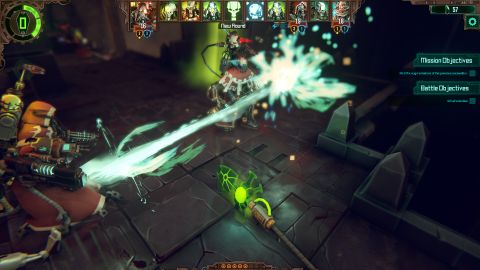 A diet XCOM in a fascinating techno-cultist skin.

A few years ago, Games Workshop loosened their grip on the Warhammer 40,000 setting, and the result has been a glut of small budget games set in the grim darkness of the far future. The quality has been mixed, but every so often a game like Mechanicus comes along that uses that glut to explore a previously neglected corner of the Warhammer universe, and makes it all worthwhile.

The Adeptus Mechanicus are, in many ways, the perfect encapsulation of what Warhammer 40,000 is about, a bizarre gothic fusion of technology and religion. They are the chief scientists of the Empire, but they treat science like a religious cult, venerating tradition and dogma over invention and curiosity. Mechanicus translates this unusual faction into a turn based tactics game, and does so wonderfully, oozing character from every pore.

Mechanicus is written by Ben Counter, who has over forty Black Library (Warhammer’s official book line) novels to his name. This experience shows, and not just because the game casually drops the word “noosphere” in the opening sentence.

The story is framed by a group of high-ranking tech priests who are constantly debating each mission. They’re all wonderfully quirky characters: Scaevola has removed so much of their humanity they new speak entirely in equations, and they’re excited to recover alien technology, while the devout Videx believes ignorance is strength and anything outside the Imperial dogma must be destroyed. Meanwhile their leader, Faustinius, has quarantined their emotions and only allows themselves to feel when appropriate. They’re Mechanicus’ great strength, and I came to truly treasure their bickering between missions.

The Adeptus Mechanicus are pitted again another of 40k’s weirder factions, the Necrons: slumbering Egyptian-themed terminators from the beginning of time who despise the living. The tech priest’s mission is to explore and investigate this tomb before the Necrons fully awaken, and a constant ticking clock reminds the player of this fact. The missions themselves consist of a series of raids into tombs. You explore these room by room, with little choose-your-own adventure vignettes popping up in each. This overmap stage is Mechanicus’ weakest aspect, the choices presented in these rooms are rarely interesting, and their outcomes seem largely arbitrary, and in the end they just become filler between each fight.

Things become much more interesting in battle. There’s no such thing as cover, which makes combat fast and lethal, initially for the tech priests and then later, after a few upgrades, for the Necrons. Combat revolves around a currency called cognition, which can be earned by scanning obelisks and corpses, as well as lots of other methods, and can be spent on things like extra movement or more powerful actions.

One of my tech priests was equipped with an axe and a bunch of melee boosting equipment. He mostly spent his cognition on extra movement, sometimes racing the length of the map in order to thwack a robot in the face. Another wielded powerful energy weapons, which required me to spend cognition to fire them at all, meaning he often stood next to an obelisk to perpetually replenish the group’s cognition supply.

Another thing cognition can be used for is to summon troops. Unlike tech priests these units can’t be levelled up and customised: they get dropped on the battlefield mid-combat, and can only perform simple actions like moving and attacking. At first the only troops available are weak servitors that exist mostly to take hits for the tech priests, but later on more powerful variants are unlocked, all the way up to the enormous Kastelan robots. You can invest as heavily or as lightly into troops as you like. Personally I found myself gravitating towards ranged units like the Skitarii, who combined neatly with a support tech priest I’d built with the ability to let them fire a second time on his turn.

As you may have garnered from this, the tech priests themselves are incredibly customisable. Each one can attach various strange gizmos, robotic arms, weapons and other gear, and has six skill trees to mix and match as they see fit. I went heavily into Explorator (melee), Dominus (ranged) and Enginseer (healing), but there were plenty of other options available.

If anything, this customisation can get to be a bit too much. By the time the Necron awakening timer had hit as little as 30%, my tech priests had levelled up so much they were demolishing Necrons in one hit. This isn’t a huge problem—I was still having fun while winning, I’d just substituted trying for victory with striving for efficiency, as any true tech priest would. That, plus a love of bickering cyborgs, is what keeps me coming back to Warhammer 40,000: Mechanicus, and what puts it above the many middling Games Workshop-based games we've seen in recent years.

A diet XCOM in a fascinating techno-cultist skin.