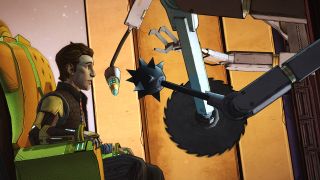 Update: Gearbox sent the following statement to IGN in response to Baker's claim:

"Troy is an exceptional talent and we were disappointed that he declined to partner on Borderlands 3 after being offered the part. We wish him the best and hope he knows the offer to collaborate with him still stands. Gearbox is a Texas company and is bound by Texas law—which means that a person cannot be denied employment because of membership or non-membership in a labor union or other labor organization. As a talent-owned and talent-led organization, Gearbox enthusiastically works to ensure our pay and working conditions meet or exceed union standards. We also believe strongly in hiring local voice actors whenever we can which is why we're thrilled Troy's career really took off after working with us."

Renegade Hyperion suit Rhys may have made a return in Borderlands 3, but he just wasn't the same. Was it the terrible moustache? The new cyborg arm? Or maybe it's because he wasn't voiced by Troy Baker, his actor from Telltale's excellent Tales From The Borderlands.

Back in April, Gearbox head Randy Pitchford stated via Twitter that Troy Baker had turned the job down, at least according to his voice director. After a chat with Baker over the weekend, VG24/7's Kirk McKeand reports that it's not quite so clean cut. Baker alleges that Gearbox decided to go with non-union voice talent this time. "They wouldn’t go union, and I can’t do a non-union gig", said Baker.

He was eager to return to the role, too, claiming that he was waiting for the call to officially bring his character to the mainline Borderlands series. Unfortunately, he was left disappointed. On the casting change, Pitchford said that "I don’t think it actually matters at all", but after hearing Rhys's new voice, I'd beg to differ.

This isn't the first recorded incident of Gearbox's antagonism towards their voice talent. Claptrap actor (and former Gearbox executive) David Eddings didn't return to voice the irritating trash-bot due to a pay dispute. Specifically, he disputed that he should be paid for the role. He had previously done the work free on the side as part of his larger role at Gearbox, but was hoping to be a fully credited and paid voice actor in the sequel.

Even outside of Borderlands, Gearbox's dealings seem to have rustled some feathers. Duke Nukem 3D composer Bobby Prince is suing the studio for using his work without paying royalties. It's also alleged that the company sent private investigators to a possible leaker's house. It's almost impressive just how much controversy this one studio generates. Personally, I hope they reconsider their stance on union voice actors by the time their next big project launches.