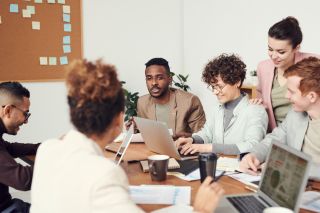 The biggest census of UK games workers ever conducted has been carried out by the British games industry trade association UKIE, highlighting some of the demographics, inequalities and struggles of the UK games industry.

3,208 people working within the UK games industry responded to the census, including developers, artists, musicians and those working behind the scenes in areas such as business management, IT and marketing. It spanned everyone from CEOs to freelance workers, but it didn't include the games media industries, meaning press and influencers were not involved.

The most striking result to come out of the census is what almost twice as many people within the games industry suffer from depression, anxiety, or both compared to the national average. According to UKIE, 31 percent of respondents disclosed their mental health problems, with both junior and mid-level workers,  as well as CEOs of smaller companies, reporting it more than others.

UKIE claims that the gradually reducing stigma towards discussing mental health could be a reason why junior workers are seemingly more susceptible to mental health problems. While junior staff have less job control and lower wages than their seniors, which could explain the rise in mental health problems, these workers also tend to be younger and may be more open to discussing their mental health than their older counterparts. UKIE notes that the results don't mean older industry workers are less likely to be depressed or anxious, they're simply less likely to be open about it.

The census also explores other demographics. Women make up 28 percent of the industry, and so are underrepresented compared to the broader population's equal split of men and women. It's also less representative than other industries, such as music and performing arts (46 percent) and publishing (53 percent), with UKIE stating that the number of women in games is "significantly below the overall UK workforce". Mental health problems are also more prevalent than for male workers, with 35 percent of women reporting anxiety and 26 percent reporting depression.

Non-binary people are better represented than the national average, however, with 2 percent of respondents saying they are non-binary, compared to 0.4 percent of the population.

Ethnically, the UK games industry is very, very heavily weighted towards White British workers. BAME (Black and Minority Ethnic) workers totalled 10 percent, while White British made up a massive 67 percent. Interestingly, even though the representation of BAME workers is well below the national average, it is actually higher than a lot of other creative industries. Film, TV, video, radio and photography had just four percent, and marketing only seven.

Queer people also have a much greater presence in the games industry than in wider society, with people who identify anywhere within the LGBTQ+ umbrella making up more than a fifth of the UK games industry (21 percent). Surprisingly, more people identified as bisexual than as gay or lesbian (11 percent versus five percent), and asexuality was at one percent. This is significantly more than the national average, which puts queer people at around 3-7% of the population.

Transgender people are also more common in the games industry, with three percent of respondents identifying as trans, an increase from the one percent of the general public.

However, LGBTQ+ people of all kinds were much, much more likely to report anxiety and depression than straight and cisgender workers. Over half of the transgender people interviewed reported depression and anxiety, while lesbians, gays, bisexuals and those of other non-straight sexualities all reported higher levels of both compared to straight workers.

Finally, it appears as though the UK games industry is less responsive to working lengthy crunch hours, with only 3.5 percent saying they work more than 50 hours per week. Three quarters worked more standard working hours of up to 40 per week.

The report itself goes much more in-depth, exploring topics such as neurodiversity (only two percent of workers are Autistic, for instance) and carer statuses (22 percent of workers cared for children), and from this UKIE came up with a number of strategies to improve the games industry going forward.

Critically, UKIE also stated that the games industry should be open to more research of this type going forward. Better tracking of diversity and progress in the sector is required, and it should "continue to collaborate with independent researchers to provide further rigorous and objective insight about working in games".

You can read the bullet-pointed key findings through the UKIE website, where you can also download the full, 60-page report.