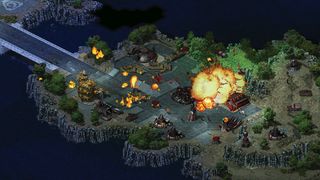 Though generally not a favourite of the classic Command & Conquer series, Tiberian Sun strikes a chord with fans who find Red Alert too basic-looking and Red Alert 2 too silly. Eight years after its 1999 release, one such fan began making a mod that pushed it into bold new territory. Created by Andrew ‘Aro’ Owen, and now supported by a larger team, Twisted Insurrection is a great example of what a talented group of fans can do for the legacy of a brilliant base game.

As well as skirmish and multiplayer modes, the mod offers a variety of new campaigns. Each one is set in a universe in which NOD won the first Tiberium War by capturing GDI’s Ion Cannon and having a huge barbecue on the lawn of the White House.

The mod itself is standalone so there’s no barrier to entry, and anyone even vaguely familiar with C&C can just download it and throw themselves into its world of intrigue. Crucially, though, this mod is over ten years old and there are still missions being developed. The sheer scale, attention to detail and lack of bugs is astonishing. Almost everything is either new or improved—with the exception of some of the basic infantry and a couple of the factories, which I suspect have been retained because Westwood did a good enough job with them.

Twisted Insurrection also adds a third, new faction: Globotech. It’s a troublesome megacorporation which boasts an impressive arsenal of mechs, drones and other high-tech equipment, all backed up by the usual ‘sir, yes sir’, infantry and imposing-looking structures.

The buildings this mod adds are so much better than those in Tiberian Sun—from the way they animate when constructed, to how they look when they interact with units and, most importantly, how they crumble and explode. Something as simple as the way your base’s main gate collapses in on itself when it lets a harvester pass is a joy to watch. Although visually superior, the new structures are designed very much in the spirit of Tiberian Sun, and they look in keeping with the few original buildings that remain. But the dozens of new details, such as road markings, signage, crates and barricades, collectively play a huge part in making this feel like a richer and well-loved vision of Tiberian Sun.

The world itself is much more urbanised and varied. There are new types of rare purple and red Tiberium to harvest and a host of strange mutations that fiercely guard it. One minute you’ll be having a Starship Troopers-style firefight with swarms of giant mantises, the next there’ll be huge centipedes and ginormous floating woodlice closing in. The maps are beautifully designed throughout the campaigns, and crafted perfectly to guide you helpfully through the story. GDI Mission 9, ‘Flight’, stands out as one of the best, and apart from being the biggest C&C map I have ever played, it throws punches at you until the bitter end. It’s a rollercoaster that escalates from a small task force hunting for an abandoned GDI air base to an all-out battle.

Noticeably, Twisted Insurrection’s units have a personality that set this in stone as an outstanding mod. Almost all of them have their own voice prompts, which is a treat no doubt inspired by Red Alert 2. A more predominant two-tier veteran system is also borrowed from RA2, and adds another level of strategy when managing which units to prioritise.

When blasted by shells, infantry leave blood trails, explosions are bigger, and vehicles are weighty. The NOD Flame Tank is a brilliant example of how Westwood made a vehicle worse in Tiberian Sun. More akin to how it looked in C&C, Twisted Insurrection’s Flame Tank spurts out huge fireballs that look like napalm, where Tiberian Sun’s just looked like an endless string of burning sausages.

Twisted Insurrection also has its own soundtrack which includes plenty of inspiration from other games in the series, really making this mod a celebration of all things Command & Conquer. For the most hardcore of fans, there’s even a track called ‘Space Echo’ that was remixed by Frank Klepacki—Westwood’s music composer and the voice actor of the original Commando unit.

In addition to its own campaigns, newer versions of Twisted Insurrection also include redesigned versions of the original C&C missions in Tiberian Sun’s engine. You can hunt down Nikoomba with dune buggies as NOD, or recapture the beachhead for General Shepherd as GDI. These missions are still in progress, but they’re a nostalgic low-tech accompaniment to the mod, executed excellently.

John's been gaming since Doom. He's 98% human, 2% cyborg, but don't let his metal wrist fool you, he still knows how to pile the bodies up on Battlefield and designs bookazines in his sleep.
See comments