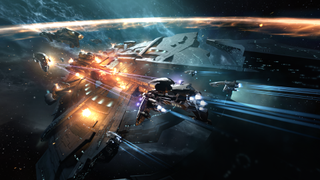 The universe of EVE: Online is set to get a major shake-up this month. EVE Online: Invasion launches May 28, bringing the hostile race known as the Triglavians into New Eden.

Developer CCP says it’s a literal invasion, and on a scale never before seen in the game. The Triglavians can currently be encountered in Abyssal Deadspace, the instanced PvE environment that was introduced with the Into the Abyss expansion last year. It seems they’ve gotten tired of waiting for daring pilots to wander into their front yards and are taking the fight to EVE’s more familiar systems, where CCP says they’ll be moving to the “forefront of the game.”

And because of how EVE is set up as a persistent world, the arrival of the Triglavian Collective means gameworld-altering events are sure to cascade out from this invasion.

“The Invasion expansion will provide a new presence and dimension to gameplay in New Eden that will bring players back time and again, inspiring them to be a part of history unfolding, the effects of which promise to change the EVE universe forever,” CCP says in a press release.

Speaking perhaps a bit more practically, Invasion will also be adding three new Tech II-category Triglavian ships to the game: a frigate, a destroyer, and a cruiser. The Abyssal Deadspace will be getting new mutaplasmids, which players can find and then use on ship modules to alter stats in unpredictable (and sometimes unfortunate) ways.

The best part is that the expansion will be free for all players. You can find out more at the official site.