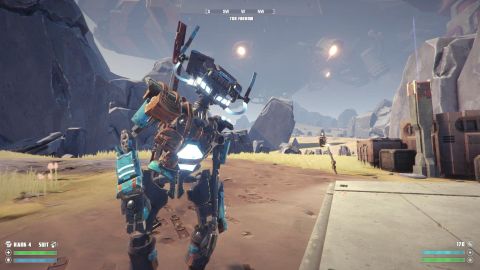 A fascinating setting and fizzing gunplay make for a lean, thoughtful exploration-led shooter.

Following on from the interestingly flawed Sir, You Are Being Hunted, The Signal From Tölva is a game about adapting to and managing your limitations. Which is exactly what developer Big Robot has done: this tiny British team has defied its constraints with a rugged and characterful sci-fi shooter that skilfully blends splendid world-building with taut action.

You explore the planet Tölva remotely, hijacking a surveyor robot to investigate the signal in question. Other surveyors will happily ignore you—though later you’ll be able to recruit them to fight alongside you—but robot factions (Zealots and Bandits) scattered across the map will shoot on sight.

It follows a familiar sandbox structure. Bring up your map and you have a handful of objectives to choose between at any given time: as you complete them, you gain access to better gear, and rank up after every three missions you report in. It’s technically open-world in the sense that you’ve usually got plenty of options for your next destination, but it’s never totally free. There’s some subtle gating in the form of corrosive elements, which require you to obtain the right hazard protection before you can pass through these areas safely. And the way the environment is designed means you’re often funnelled down relatively narrow routes.

These are smart choices for what is a relatively compact open world, giving Big Robot some control over the pacing of progression and storytelling without making you feel like you’re being too forcefully guided. You’re be able to delay the ending, but as environmental anomalies and emanations from the surface grow stronger and more frequent you might find yourself too intrigued to resist marching to the finish before you’ve picked the map clean.

To judge The Signal from Tölva on its fundamentals is to risk making it sound boring. In terms of the activities available to you, it’s undeniably limited. You’ll tag map markers to set waypoints, yomp towards them, and take out pockets of enemies in mid-to-long-range combat when you get there. You’ll capture bases and beacons as fast-travel points. You’ll scan the odd artefact, and dabble in a bit of resource-gathering, vacuuming up every item within a narrow search zone.

In practice, there’s rarely a dull moment, and it’s all in the details. Exploration is enjoyable partly thanks to the sheer physicality of it. You don’t walk, you stomp, the camera gently jogging in a way that conveys a sense of weight without making you queasy. There’s a jump button you’ll barely need, but you’ll press it anyway, just because it feels brilliant: you can almost hear the shock absorbers wheezing as they cushion the impact of landing.

Sometimes your view is a little bland, with nothing to look at except sparse plains and arrangements of rocks, but you rarely have far to travel before finding something to marvel at. Remains of abandoned ships tempt you over to sift through the wreckage; elsewhere, enormous craft hover ominously overhead, making you feel desperately small and fragile. There are fascinating hints at the history of the place, which clearly stretches a long way back. Among the evocative sights, some are oddly sad, like a large broken-down robot, trapped and alone, emitting haunting, ethereal sounds that echo around the rocks.

The slow-burn exploration is punctuated by bursts of crisp, satisfying combat. It pays to scout first with your scanner, which lets you tag enemies so you can pick them out more easily: particularly useful when it’s dark and you don’t want to risk revealing yourself by switching your torch on. When it’s time to engage, it’s the sound design that stands out most: laser bolts whoosh and energy beams snap and fizz as they scythe through a bandit’s outer shell, before your target explodes with a thunderous boom.

Naturally the noise can easily alert other patrols. At times, you’ll finish one fight only to find yourself immediately embroiled in another. These are among the game’s most tense and exciting moments, particularly when you’re on the cusp of activating a new fast-travel point with your plasma shields down and only a sliver of energy left, as you cower behind a rock, praying for your area-of-effect attack to finish recharging.

With only two weapon slots besides your trusty sidearm, you need to pick your loadout carefully. Assault rifles are fine for close-quarters skirmishes, but woefully inaccurate from further out. Sniper rifles might let you thin out enemy numbers if they don’t spot you first, but once that first shot pings home, the rest of your victim’s robot buddies will rush in your direction. Their AI is pretty good: they’ll crouch to aim more accurately, put their shields up under fire and scuttle for cover when their barrier is depleted.

You won’t necessarily have to handle them alone. It’s not long before you get your hands on a command module, which, as you rank up, lets you recruit more (and more powerful) surveyor allies. The trade-off is that it takes up one of your weapon slots. Much as it’s fun to play as a lone gunbot with a choice of weapons beyond your piddly pea-shooter, when clearing out a well-protected bunker it definitely pays to posse up.

That said, AI allies have a bit of a death wish. That’s not to say they won’t deploy their shields under fire, but they do have an unfortunate habit of wandering directly in front of you as you’re firing so you hit them instead. It’s not the only annoyance. Factions will fight among themselves for territorial control, which includes the emplacements you’ve already secured. But with no way to defend or fortify bases, it can feel a bit unfair when you die and you’re forced to make a long trek back from the previously activated checkpoint.

And while you’ll acclimatise to the consciously slow pace, towards the end, it can feel like Tölva’s dragging its heels. With bunkers—the only reliable place to find new robot recruits—spread farther apart, you’ll face a long, slow trudge to the last couple of critical missions. Invariably, you’ll get set upon en route, lose two of your pals (even when switching your AOE to heal any friendly robots in the vicinity) and get overwhelmed at your destination, forcing you to repeat the process.

These are minor blemishes, though. The Signal From Tölva is easily Big Robot's best game yet: a lean, intelligent sci-fi shooter with a watchmaker’s eye for detail that knows its strengths and plays to them beautifully.

Disclosure: Big Robot's Jim Rossignol used to work for PC Gamer up until 2010.

A fascinating setting and fizzing gunplay make for a lean, thoughtful exploration-led shooter.