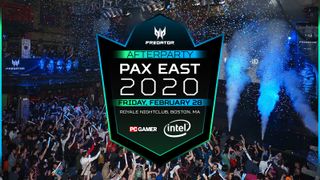 At PAX East 2020, Acer Predator is returning to Boston for the 5th Anniversary of their Predator After-Party. To celebrate 5 years of hosting the most popular PAX after-party around, Acer and its partner Intel® are printing a limited amount of  “Anniversary” T-shirts to commemorate the occasion and will be available at the merch store. The best part, you get to vote on its design!

First, the launch details you need to know: Acer Predator After-Party 2020 is returning to the Royale Boston, the former opera house turned nightclub and concert hall built to cram in as many PAX attendees as possible. Mark your calendars for Friday, February 28th from 9pm–2am, but make sure to RSVP for the event here—last year’s event was the top-attended PAX East after-party, and slots fill up fast!

You’ll see everything you’ve grown to love from a Predator shindig. Try out the latest and greatest Predator gaming desktops and notebooks in the gaming demo zones. Guests who engage with the #PredatorPAX hashtag will have the chance to win amazing gaming upgrades; this year, you could snag a Predator Helios Laptop or the new 32-inch Predator X32 gaming monitor with NVIDIA ® G-Sync ® ULTIMATE, making year 5 tough to miss.

But the greatest memories will come from more than just free giveaways. You’ll have your chance to play like an esports pro and take on members of Team Envy in matches of CS:GO. Or you can spend your time on the dance floor grooving to the incredible, Grammy-winning beats of DJ Audien. Or drag yourself away from the gaming and dancing, and get in line early for the crowd-favorite photo booth: back this year with new green-screen backdrops and gaming-themed props for some epic photos with your friends.

Looking back on 4 years of #PredatorPAX

When you register for the event, you’ll have the chance to vote on your favorite Anniversary design. Acer and Intel are marking the event by looking back on the most amazing moments that fans loved most. By voting on your favorite design, you’re telling them exactly what you loved most about your after-party experiences.

You may have been one of the lucky gamers to score a shot against an esports pro on stage. Were you one of the few who beat CS:GO pro gamer Tweeday in a 2v1 grudge match in 2016? Or possibly you were part of the “Pros vs. Joe’s” ambush last year, when Team Envy took the stage expecting to dominate the crowd in Rocket League but were challenged by the audience in Rocket League matches instead!

If you didn’t end up on stage, maybe your friends photographed you dancing to any of the epic DJ sets. Were you more of a fan of Yellow Claw’s mix of Dutch hard style, dubstep and hip hop, ARTY’s EDM and trance, MissNINJA’s decades-spanning mixes or Pegboard Nerds’ video game-influenced set?

We’ve collected some of our picks for the coolest moments from the past four years above. Maybe you’ll see yourself trying out the Thronos Gaming Chair, posing with the giant dinosaur cosplayer that crashed the 2018 event, or just gaming with your friends! Or if you couldn’t make it to previous years’ events, now’s your chance to hit up the anniversary event and see if Acer and Intel can throw the most amazing party yet!

Don’t forget to RSVP for the event here and vote for the “Anniversary” shirt that best represents the Predator After-Party to you!