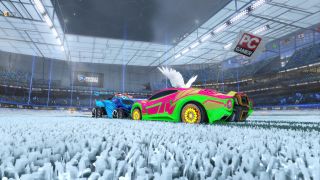 Update: Most prices have been reduced.

Original story: Loot boxes are reviled by many, but their removal from Rocket League hasn't been met with open arms. Even if the new system technically saves players money on ultra rare items—loot boxes are not known for their value—it doesn't feel that way. What it feels like is shopping at a tourist trap where all the items are marked up 500 percent.

As a brief primer, Rocket League's old system dropped crates after completed games. Keys, which cost a dollar a piece in bulk, opened them. Chances are, any given crate revealed a boring decal for a car you don't use, but they also offered the slight possibility of getting a coveted Black Market item, a category which includes universal animated decals and showy goal explosions.

The new system drops Blueprints instead of crates, and crafting a Blueprint costs Credits. If you're lucky enough to get a Blueprint for a Black Market item you want, it costs 2,200 Credits to build. At $25 for 3,000 Credits, that's a pricey decal.

It is technically a discount, at least if opening crates had been your primary way of obtaining new items. Unless you were ridiculously lucky, you might've had to spend hundreds of dollars on keys to get a Black Market item in the past, and it wouldn't necessarily have been one you wanted. Spending $20 on keys to open 20 crates for 20 items only feels like a better deal until I look at my mess of an inventory, which is full of duplicates and uninteresting wheels and paint finishes I'll never use.

But back when loot boxes were still around, marketplace websites connected players for trades, and deals could be struck on popular items—sometimes more than $25 for extremely coveted decals, cars, and goal explosions, but sometimes less. Now the market can only adapt to Psyonix's price point.

I didn't play the market, hunting for players willing to take my Titanium White car bodies in exchange for keys I could use for the next trade, so the change affects me less than others. But I think many of us can agree on this: There's no damn way I'll ever put down $25 to buy enough Credits to unlock one Black Market decal, even if I've spent far more on keys over the past several years. I appreciate that it's no longer an exploitative game of chance, but the new context makes me ask: "Will I really get $25 worth of enjoyment out of this item?" The answer is a resounding no.

I might spend $10 on an item I really want—Rare, Very Rare, Import, and Exotic items now go for between $1 and $15 worth of Credits—but even that's pushing it. If I had my way, I'd lower prices, but more importantly, I'd let players dismantle the crap they don't want for Credits.

Right now, you can trade up items for better items, but the system is annoyingly restrictive: you have to match five items of the same rarity from the same set, and some items can't be traded up at all, which means my inventory is clogged with orphans. After years of playing, I have loads of items that do nothing for me.

Knowing that inventory clutter is an issue, Psyonix added a way to archive old items, clearly skirting the obvious alternative. Let us turn them into Credits, the way unwanted Hearthstone cards can be turned into Dust to buy other cards. I would happily discard 30 old player banners and car toppers to build a Blueprint. Does Psyonix make less money that way? Maybe, but I'm not spending $25 for one decal, either, so it seems we're at a stalemate.

I'd wager that, whatever the pricing, Psyonix will pull in less money than it did with loot boxes—there's a reason they became so popular with game publishers, after all. Loot boxes rain cash, and it's an overall good that Psyonix has done away with them in favor of transparency. But the fact that most of us are getting a better deal with direct purchases doesn't counteract the sticker shock. The replacements are simply too expensive.

Right now, I'd wait and see what happens to the prices. A more business-minded person once told me that you always want to start high when pricing something for the first time, because it's easy to lower prices if sales stagnate, but much harder to raise prices if it turns out you undervalued your product. That may be the strategy here.