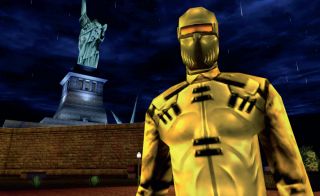 Reinstall invites you to join us in revisiting PC gaming days gone by. Today Andy goes back to the future.

In the earliest Deus Ex design document, written three years before the game was released in 2000, Ion Storm established the philosophy of their ambitious cyberpunk RPG. “The key to role-playing is giving players the freedom to act as they see fit,” it reads. “And a deep world simulation that allows them to solve problems in a variety of ways is the best way to do this.”

And that’s the core of what makes Deus Ex a PC classic. The sheer breadth of its systems and the complexity of its level design is unmatched, even today. A lot of things were cut from that document—including a level set on a space station—but Warren Spector and his team’s original vision of a deep, rewarding RPG set in a rich, simulated world remained intact throughout development.

When Deus Ex was being developed, The X-Files was deep into its fourth season. And Chris Carter’s cult show is an obvious influence on the game, with its government conspiracies, shadowy secret organisations, men in black, and bug-eyed aliens. The design document confirms this, describing the story as “leavened by its dark, mysterious, conspiratorial tone” and any tinfoil hat conspiracy theory you can think of, from Area 51 to the Bilderberg Group, factors into the story in some way. It’s a world where paranoia about ancient secret societies pulling the strings of government is entirely justified.

In the ‘high concept’ section of the design document, Ion Storm asks: “Is it better to live free in a world of chaos or live safely in an ordered world of someone else’s design?” And that’s one of the major themes in the sprawling, labyrinthine story. You play as JC Denton, a government agent enhanced with augmentations that grant him superhuman powers.

When the game begins he’s employed by a branch of the United Nations created in response to the growing threat of international terrorism. But after learning that his bosses have ties to a sinister Illuminati plot, he joins his brother Paul in the resistance against them. “Deus Ex plugs into two popular fantasies,” reads the document. “The millennial madness that’s gripping the world, exemplified by The X-Files and a general fascination with conspiracy theories. And the desire to play with high-tech espionage toys.”

And it’s these toys, as well as Denton’s augmentations, that makes every playthrough of Deus Ex a wildly different experience. The first level, Liberty Island, showcases everything that’s great about the game’s open-ended design and how it rewards creative thinking. It’s smaller than other levels, and I’m still finding new ways to infiltrate it. The statue not only provides a useful navigation point, but her missing head, blown off by terrorists, is an evocative piece of world-building. A clue that maybe everything isn’t totally cool in this dystopian vision of the future.

The best of the worst

Terrorists have taken over the island, and you have to deal with them. But how you go about this is truly up to you. There are dozens of entry points into the statue, some more dangerous than others. If you want to waltz in through the front door, you can. But you’ll have to find a key, hack a series of cameras, and deal with a security bot. Or you can stack crates to climb up to the statue and avoid the security systems altogether, but will have to deal with a group of terrorists in an open area without much cover. You learn these things through experimentation, and that’s part of what makes Deus Ex so compelling. You’re presented with these big, complex puzzles and the game leaves you to figure out how to solve them by yourself. And when you do, it’s hugely satisfying.

But it’s not all espionage and infiltration. Outside of missions you’re free to explore, talk to NPCs, complete sidequests, and learn more about the state of the world through documents and news reports. Deus Ex is an enormous game, featuring three massive cities—New York, Hong Kong and Paris—and other locations including Area 51. You simply couldn’t make a game this big today with the visual fidelity expected of modern games. In New York you witness the devastating effects of the mysterious Grey Death virus, while in Hong Kong you team up with Tracer Tong and the Triads to investigate an Illuminati presence there. There are so many secrets hidden in these city hubs—and overwrought philosophical debates to be had with talkative NPCs – that a thorough playthrough of the game could easily take 50 hours.

But while the levels are huge, they’re not big for the sake of it. This was another thing Ion Storm outlined in their design document as being important. “So many games simulate huge worlds and brag about it,” it reads. “Witness Daggerfall with its hundreds of generic towns, its shallow conversations, and its randomly generated quests. We feel there’s more to be gained by limiting the size of our simulation so we can increase the density of interaction.”

And this density of interaction is another of Deus Ex’s many strengths. Its levels are filled with things to prod, poke, switch on, and mess with—from incidental details like flushing toilets to intricate security systems that can be manipulated to help you sneak through the level. “This gives the illusion that this is a real, vital place,” reads the design document. “It makes the levels feel like they have a life of their own, independent of player action.”

And it has a sense of humour too, often as a result of this freedom and interactivity. If you stumble into the ladies’ bathroom in UNATCO’s Liberty Island HQ – which most players will as they hunt for secrets and hidden items—your boss Joseph Manderley (who recently appeared in Mankind Divided) will give you a stern talking to about it. Ion Storm knew players like to explore every nook and cranny of a level, and they made a joke in response to it.

It’s a small detail, but one of countless tiny reactive moments that reinforce the idea you’re having an impact on this world, not just existing in it. And who could forget mechanically-augmented agent Gunther Hermann ranting about getting the wrong soda from a vending machine, convinced the maintenance man has a vendetta against him. The story deals with some heavy stuff—mass surveillance, corruption, conspiracies, viral epidemics—but it offsets it nicely with some dry humour.

A great example of the game’s reactivity can be found in the Hell’s Kitchen level. Denton’s brother Paul, who ends up being hunted by the Illuminati, is holed up in a grimy hotel. It’s called the ‘Ton by the locals, referring to the fact it was once a Hilton, but the ‘HIL’ on the sign has faded away. After completing a few missions in New York, Paul’s safehouse is compromised and the Illuminati sends a squad of ‘men in black’ agents to kill him.

These guys are armed with heavy weapons and can take a ridiculous amount of damage. Paul tells you to run and escape through the bathroom window, which most players will do when faced with these seemingly impossible odds. If you escape, Paul dies and never appears in the game again. But if you stay and fight, and somehow manage to kill the men in black and the UNATCO troops who’ve invaded the hotel, Paul will appear in Hong Kong. It’s unlikely that players at this stage in the game, especially on their first run, will have the skill or augmentations to win this fight, but the fact you can is precisely why Deus Ex is such a special game. It has a response, even if it’s just a line of dialogue, for almost everything you do.

One part of Deus Ex that’s really showing its age though, is the visuals. It’s a hideous game, with blocky environments, blurry textures and ugly character models. But luckily there are mods that will sort most of these problems out, including the incredible Revision. This overhaul is free on Steam for anyone who owns the GOTY edition, and as well as fixing bugs and remixing several maps, it makes it look slightly nicer to modern eyes. But it does change quite a few fundamental things, so if you want to play the game as Ion Storm intended it’s probably best to stick to the original version.

Then there’s Shifter, a mod that adds further depth to an already deep game and exists to, in its creator’s words, “remove the suck” from the base game. It introduces a skill point system that rewards you for feats the vanilla game would ignore, like taking out a room full of men in black. It makes enemies smarter and tougher. And it gives weapons alternate fire modes, including launching napalm bombs with the flamethrower. Again, installing this will seriously alter the game, so think carefully before trying it—especially if it’s your first playthrough. Some people don’t like Shifter or Revision at all, but that’s exactly what PC gaming, and Deus Ex, are all about: choice.

The game is still totally playable without any mods, of course. But you might have to dig through some forums to find out how to get it running at modern resolutions. The Game of the Year edition (whatever that means) is often on sale for a tiny amount of money on Steam, so if you’ve never played it before, there’s really no excuse.

There’s a long-running internet joke that whenever Deus Ex is mentioned on a forum, someone will reinstall it. And it’s something you should consider. Because even if the visuals don’t hold up, the game definitely still does.