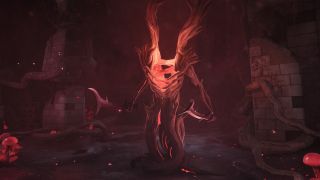 The third-person survival shooter Remnant: From the Ashes is getting a new Adventure Mode later this week that will enable players to "re-roll" the Ruined Earth, Rhom, and Yaesha biomes without having to play all the way through the main campaign first. Developer Gunfire Games said the new mode, which can be activated from the World Stone in Ward 13, will let players "explore dungeons,encounter new enemies, or fight their favorite (or toughest!) world bosses" in dynamically generated biomes.

What's big about this is that it gives players the ability to grind areas of the game to their heart's content, without disrupting their campaign progress. "In addition to giving players a chance to uncover all of the game’s secrets, all of their progress and items obtained in Adventure Mode stay with their character, so they can keep rolling in order to obtain all of the many weapons, armors, mods, and other items the game has to offer," Gunfire said.

One week after Adventure Mode arrives, a new quest called Leto's Lab will open up, giving players an opportunity to tour Research Station Alpha, where head researcher Leto Apostolakis investigated his theory that the mysterious World Stones could be used to cross the space-time continuum almost instantaneously. That sounds like the sort of thing that inevitably leads to trouble, and of course it did, as Apostolakis "started using the World Stones to fuel a series of dubious experiments." The situation eventually unspooled to the point that the lab had to be evacuated, and now it's time for you to go back in and deal with light puzzles and heavy combat, including an all-new boss fight.

Remnant: From the Ashes Adventure Mode will go live on September 12, followed by Leto's Lab on September 19. Both are free for all players, and will appear as regular updates.