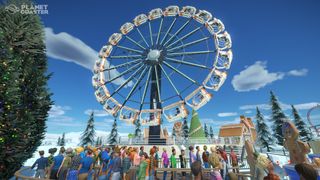 Frontier Developments—creator of Elite: Dangerous and Planet Coaster—is suing publisher Atari, over unpaid royalties for its 2004 theme park sim RollerCoaster Tycoon 3. TMZ broke the news, stating that Frontier believes it's due $2.2 million more than it received in royalties, while the developer later confirmed to Eurogamer and others that it is, indeed, pursuing a legal complaint.

"We can confirm Frontier is currently pursuing a complaint against Atari. We have attempted to resolve this issue without legal action since April 2016. We have so far been denied our contractual right to audit by Atari, and we are unfortunately left with no other way to resolve our concerns. We are unable to offer any further comment while the matter is subject to due legal process."

The TMZ report reckons that Frontier Developments has been working with Atari since 2003. Atari went bankrupt in 2013, but Frontier continued to work under an "amended" contract, so says the website. Fast-forward several years and Atari is in better shape, but with allegedly higher sales figures for RollerCoaster Tycoon 3 than previously thought, there's a $2.2 million royalty discrepancy that Frontier is now attempting to recoup.

We'll bring you more about the case when we know it.