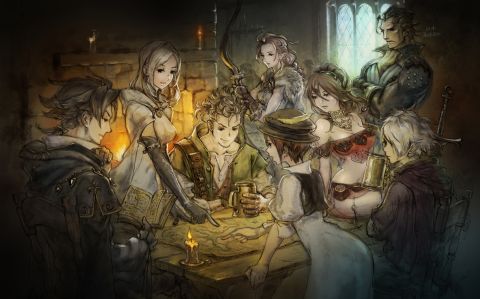 Never quite the sum of its parts, Octopath Traveler is a game with brilliant moments rather than a brilliant game.

What is it? A JRPG that’s old-fashioned and forward-thinking all at once
Expect to pay: £50/$60 (Steam)
Developer: Acquire
Publisher: Square Enix
Reviewed on: Intel Core i3-8350K CPU, 8GB RAM, GeForce GTX 1060
Multiplayer? No
Link: Steam

What's new is old again. The trademarked 'HD-2D' art style of Acquire's likeable JRPG tips its hat to its publisher's rich genre history while acknowledging technical advancements since Square’s 16-bit golden age. Combining pixel art with contemporary effects—shallow focus, bokeh, real-time lighting and shadows, slightly excessive bloom—it's an immediately distinctive look. As a fusion of past and present, it works very well...up to a point. And, well, I'm sure you can see where I'm going with this.

Octopath Traveler’s main hook isn't entirely new. The idea of a multi-stranded tale with several protagonists harks back to Dragon Quest IV, though that had five heroes rather than eight, and managed to tie its narrative threads together more effectively. This is more like eight different stories that occasionally—and awkwardly—cross paths.

However, here you can choose who to begin your adventure with, whether it's a thief chasing a rare treasure, an ageing sellsword looking for a face from his past or a homebody merchant who's simply seeking adventure. Each has an individual skill that can be used in interactions outside battle: hunter H'aanit can goad NPCs blocking your path into fights, while axe-wielding apothecary Alwyn uses his friendly demeanour to coax useful information out of villagers. For some characters, it amounts to little more than pressing another button rather than 'talk', but others involve an element of chance. The light-fingered Therion can pickpocket valuable kit, but if he's caught then the locals will no longer trust you. Though since this can be reversed, it's usually worth the risk.

You'll play through the first chapter of your chosen protagonist's story, before heading out into the wider world to recruit the others to add to your party—after playing the first chapter of theirs. On paper, this approach promises more flexibility than you really get. Once you've made your choice, you'll inevitably follow one of two routes to the closest allies, and from then your path is all but determined. To get through the toughest challenges, you'll need everyone up to speed, so you can't realistically pick and choose whose stories you follow. And after a while the recommended levels for each area—to which it's wise to pay heed—only narrow your approach further.

Still, if it never really feels like a journey you have total control over, eight characters make encounters thrillingly versatile. Again, it's a blend of familiar ideas made to feel fresh. As in the Square-published Bravely Default games, you can save up attacks for future turns, making them much more potent. And similar to the Shin Megami Tensei games, it's all about finding individual weaknesses and exploiting them to 'break' your opponent. Each one you face has a number of shield points, and once that’s whittled down to zero, they'll be stunned, letting you line up devastating combinations when their defences are down. In the field, you can experiment with different tactics, refine them against the rank and file in the various dungeons, and then try them out against the monsters (human or otherwise) at the end.

Although some of these fights drag on a bit—and one or two in the late game can only really be beaten by using very particular strategies—this is where Octopath Traveler is at its best. Your characters retain their ‘chibi’ style even in battle, while these enemies grow to towering stature: a visual quirk that takes some getting used to, though it soon feels like a clever way of emphasising the threat you're facing. Though sparsely animated, these giant sprites are beautifully drawn, while the vivid effects that accompany each attack and Yasunori Nishiki's brilliant battle themes make each one feel like an event.

Over time, it grows into the kind of JRPG where you can happily spend hours tooling around with the diverse range of skills and supporting abilities you earn from different jobs. Characters can assume secondary roles which play up their strengths or cover their flaws. Halving SP consumption for your most powerful spellcaster is a no-brainer, while the 'insult to injury' support skill means status ailments last an extra turn. Alwyn's 'hale and hearty' can give your tankiest character even more HP with which to aggro opponents, or you could pair that with gear that maxes your evasion stats and have enemies focus their attention on a hero they'll rarely hit.

It’s a pity your party only really becomes a team on the battlefield. Outside it, the characters rarely feel connected, while potential conflicts are also conveniently ignored, even when two characters’ morals should theoretically be in opposition. Octopath Traveler gives us reason to care about the eight protagonists as individuals, but in failing to bring their stories together, it falls short of the classics that inspired it.

Never quite the sum of its parts, Octopath Traveler is a game with brilliant moments rather than a brilliant game.