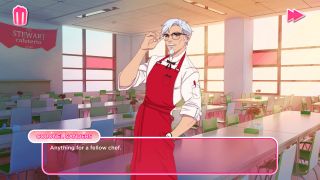 PC Gamer's UK office is located in Bath, a town which hasn't had a KFC since 2017, when—in an act of horrendous irony—it was torn down and replaced by a gym. And look, despite it being a very bad KFC, it's still a fact that you miss something once it's gone. Sometimes I pine for KFC, mostly because I can't have it.

And this is why, when I hear of KFC-published dating sim I Love You, Colonel Sanders! A Finger Lickin’ Good Dating Simulator, I'm trapped between two conflicting feelings. Feeling #1: The grim acknowledgement of late capitalism's accursed need for attention. Feeling #2: Just an aching hunger for some objectively unremarkable hot wings.

In I Love You, Colonel Sanders! A Finger Lickin’ Good Dating Simulator, a game that embodies the very essence of the concept of 2019, you play a culinary student trying to win the heart of your classmate. Your classmate is Colonel Sanders.

That is the joke.

"Throughout your journey, you’ll be faced with life-changing decisions that will affect your chances of friendship and love," explains the Steam page, with a massive wink to the camera. "But be careful! Your choices have real consequences with real animated characters’ feelings at stake.

"Do you have what it takes to survive culinary school? Will Colonel Sanders choose you to be his business partner? Or maybe even so much more? Find out in the most finger lickin’ good dating simulator ever created—a game that KFC actually made."

While I could make fun of this—certainly I get a sort of stress headache if I look at the Steam page too long—I do have to admit that I am charmed by Professor Dog. None of us are free from sin.