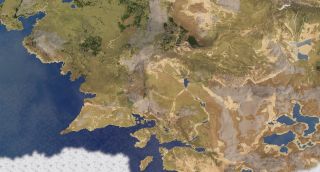 Every Paradox grand strategy game ends up getting a Lord of the Rings mod, even Hearts of Iron 4, so obviously someone has already gone and turned Imperator: Rome's map into Middle-earth.

Creator MattTheLegoman posted a screenshot of the map, designed with the game's map editor, on Reddit. It's "rough" and only shows terrain, not provinces or cities, but it also looks pretty promising. It's certainly detailed. Visually, Imperator's map is quite a big leap, so I'm really eager to see even more flashy recreations of fantasy worlds.

Azeroth, Tamriel and Westeros usually pop up, each time slightly different, so I wouldn't be surprised to see some custom maps or even total conversion mods. The Crusader Kings 2 variants are typically the ones I end up enjoying the most, but Imperator has some brilliant systems of its own that could lend itself really well to these settings.

While Imperator uses a new version of Paradox's Clausewitz engine, it's still been designed with modding in mind. Everything can be tweaked or overhauled. Paradox broke down modding in a dev diary that can check out here. If you want to edit the map specifically, you'll need to start up a new game, open up the console (it will either be the ~ or ` key) and then type "map editor".