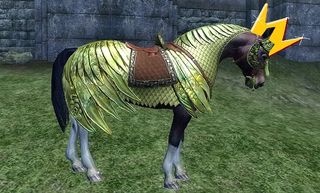 How we laughed when, in 2006, Bethesda decided to sell plate armour for your horse in Oblivion. $2.50 for a virtual coat of armour for a horse that doesn't exist? The idea seemed ludicrous. It was widely mocked online.

But people bought it.

Oblivion wasn't the first game to dabble with microtransactions. Mobile games have been selling them for years, but horse armour represented an encroachment into the once-sacred space of single player RPGs. There was once a covenant: buy a game; get the whole game. Horse armour won by breaking that covenant and opening up every interactive space to new modes of monetisation.

A couple of bucks for a virtual cosmetic seems completely normal now. If there's an overton window for the types of sale a player will accept, it has widened this decade, to the extent that you can pay hundreds of dollars for a Star Citizen ship. These ships are designed and sold like sports cars—beautiful sleek objects you can enjoy in your virtual hangar. The pleasure isn't just in flying one of these ships, merely possessing one is enough. It makes you a legitimate part of the cool industrial space universe that CI are gradually constructing.

The last 13 years have been a massive social experiment. How much are players really willing to pay on top of the standard $60 for a game? Where do players' sense of value lie? Valve took on these questions with gusto in Team Fortress 2, an interactive experience that is now more hats than game. TF2's friendly, funny universe allowed for an enormous range of comedy accoutrements. The genius of the system was that developers no longer had to guess what players might find valuable. The economics of the Steam market could decide that instead.

Valve's hat economy is an example of a microtransaction system that works, particularly because it rewards players for creating and selling items. Studios have made many attempts to bring players into a content creation loop, but most make the mistake of expecting players to create content for nothing.

But Team Fortress 2, and Dota 2, are session multiplayer games. There's some worldbuilding there, but it's all a platform for fast competition. Horse armour caused outrage not just because of the price, but because it undermined the sanctity of the virtual world Bethesda created. RPGs ask you to buy in to a setting and really invest time and attention in realising the fantasy the game is trying to sell to you. The idea that you pay $2.50 and an Orc manifests and sells you horse armour breaks the game's promise to deliver a living world free of commercial artifice.

It also trades on a negative 'fear of missing out' feeling. The knowledge that you're not getting the absolute fullest game experience from your purchase can undermine the game. Microtransactions in this decade's singleplayer games have gone further than horse armour ever did. Recent Assassin's Creed games have charged for XP boosters that make your progress through the game smoother. Shadow of War tried to sell players loot boxes, but had to remove them after six months after a considerable backlash.

There's no turning back now. Publishers have become smarter about knowing when microtransactions can feel egregious or unfair, but the rise of the service game has opened up new opportunities to make sales. Sometimes devs accidentally cross the pain threshold, and there's kickback, as Bungie experienced with their Destiny 2 microtransaction portal, the Eververse store. But there's no doubt that microtransactions are here to stay.

Looking back across the years, it seems inevitable: if Bethesda hadn't realised the opportunity, another company would have seen it. At the time we laughed at pictures of horses wearing plate mail next to a price tag, but the joke was on us.