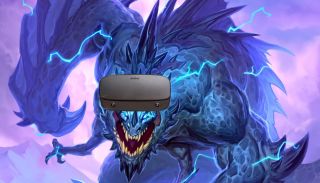 Hearthstone's tavern seems impossibly cosy and welcoming, the perfect place for a friendly card battle, but our eyes are always fixed on the board. A VR version that plonks you by the bar and lets you do a bit more than just play cards sounds very tempting, and apparently Blizzard concurs, to the extent that it developed a Hearthstone VR prototype.

Chatting to PowerUp, lead effects artist Hadidjah Chamberlin mentioned that a pair of developers had created the prototype at an internal Blizzard event, but the chances of any of us ever getting to take it for a spin are extremely slim.

"They actually prototyped a VR version of Hearthstone during that time," Chamberlin said. "You could walk around the tavern and sit down to play a game with someone." It didn't go much further, however. "They only had two weeks, so they only got as far [allowing you to] throw cards at the table and you could flip the table over!"

As cathartic as it would feel after a shitty game, I suspect that flipping tables would be the first thing to go if Hearthstone ever did get a proper VR spin-off. I'd never dream of doing something like that, of course, and all the times I've knocked over my opponent's models in Warhammer have been entirely accidental. I'm just clumsy.

Blizzard doesn't appear to have any plans to make it a reality right now. Principle narrative designer Dave Kosak said it had been discussed, but he reckons players would rather keep things simple, like using a tablet. It does seem like the kind of thing that would be a cool novelty that people would play for a week before going back to classic Hearthstone.

Alternatively, you can always play Tabletop Simulator, which also happens to be one of the best ways to play board games on PC. It lets players create their own games, so you can find Hearthstone adaptations or just make your own. And yes, it even lets you flip tables in VR.